I first saw the square Water Meter a few years ago while exploring Capital Hill in Seattle. W.M. is actually my brother's initials and I knew I would go back and print it someday. Fast forward three years and I'm back in Seattle hanging with none other than big bro. We stumbled across the square cover around mdnight and I made plans to go back and print it the next day. After cirlcing that same block about 10 times, I couldn't find it and gave up. Instead, I decided to print a small rectangle along the waterfront. It wasn't the one I wanted to do, but I needed a fix and had to paint something. 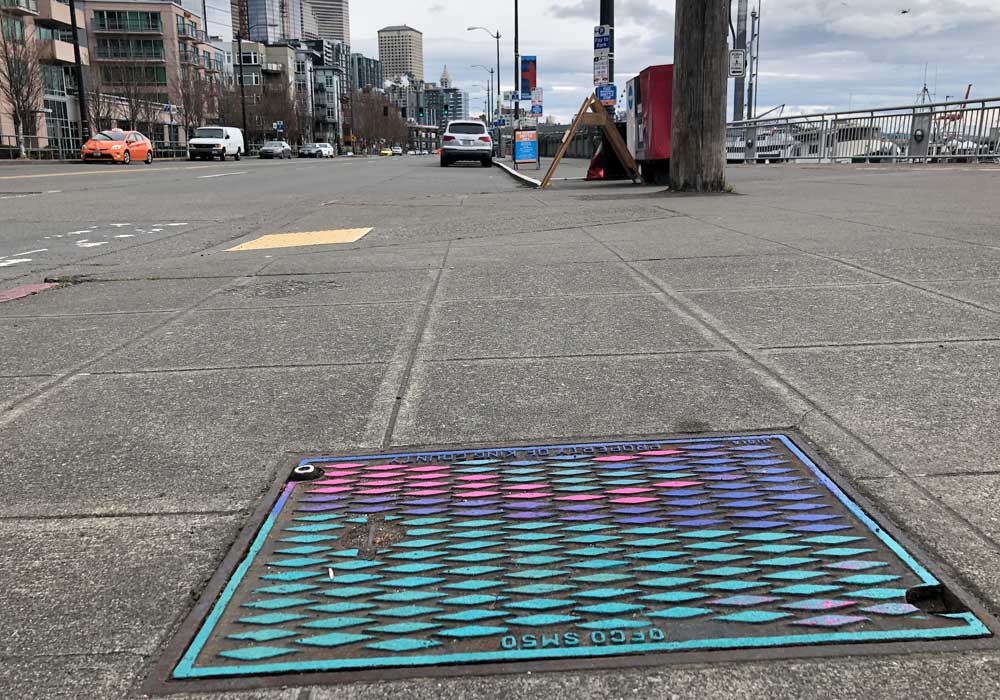 I had no plan but to enhance the beautiful diamond pattern with some color and maybe call it done.

The next day I was killing time on Capital Hill waiting for WM to get out of his meeting when I stumbled across another rectangle water meter. That's when I got the idea to mix up the patterns and created a layered piece. Without hesitation, I started cleaning it off and mixing up the inks. Before I knew it, the Olympic Foundry cover was looking like a fresh pack of Fruit Stripes gum and I wanted to taste it. 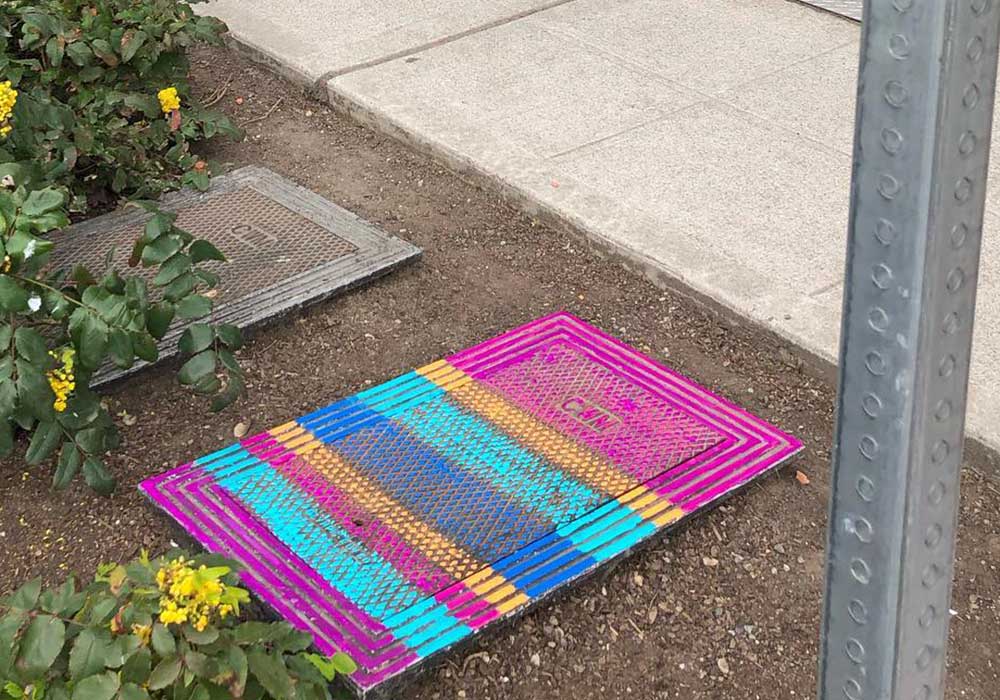 Instead, I pondered the placement for what felt like hours and laid the canvas down.
I couldn't have lined it up any better than I did. The colors, diamond patterns, and overlays were like nothing I had ever printed. 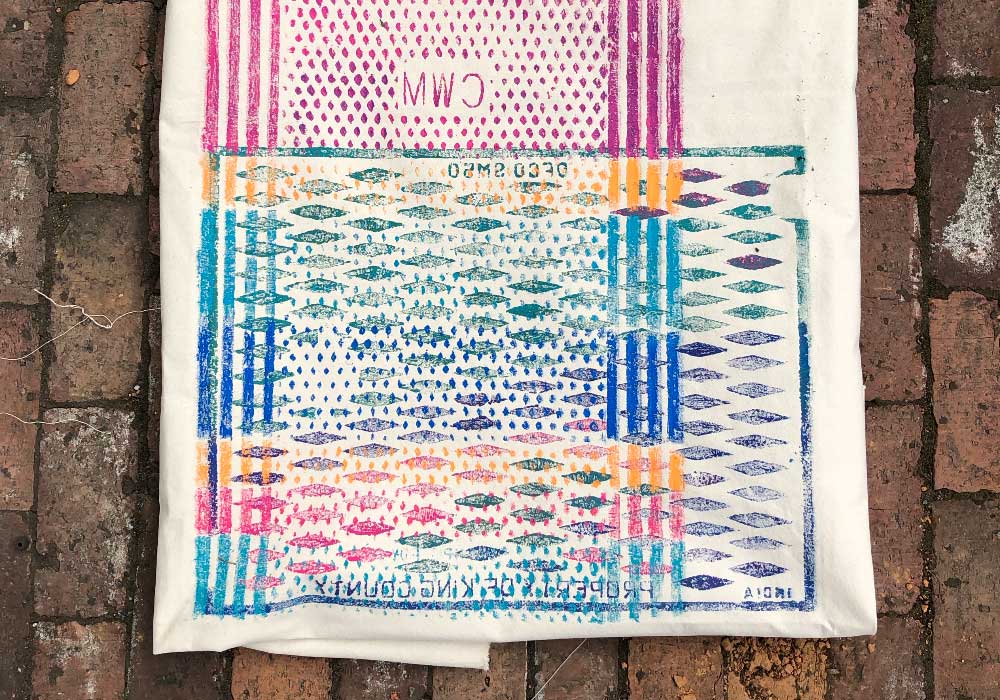 About ten minutes later, I ran across the same design I had originally planned to print - the big rectangle with my brother's initials on it. I snapped a pic, grabbed my laptop, and started to mock up the final layer. 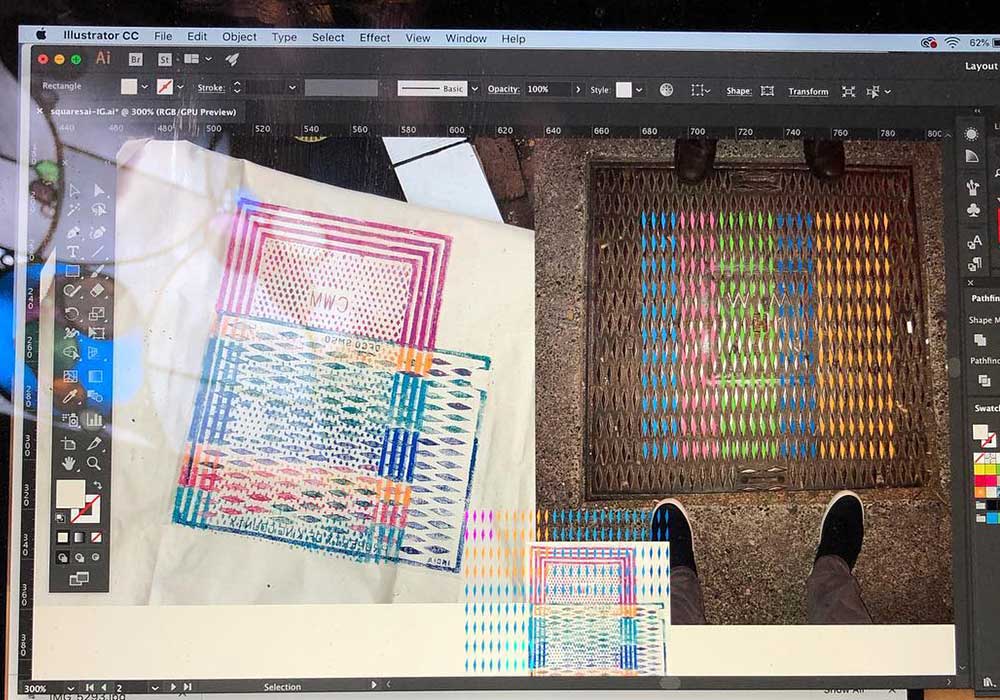 I decided on a layout, went back to the cover, and started painting. I really wasn't confident of my design but only had one day left so went for it. Halfway through, it started to rain and the print mission was aborted. 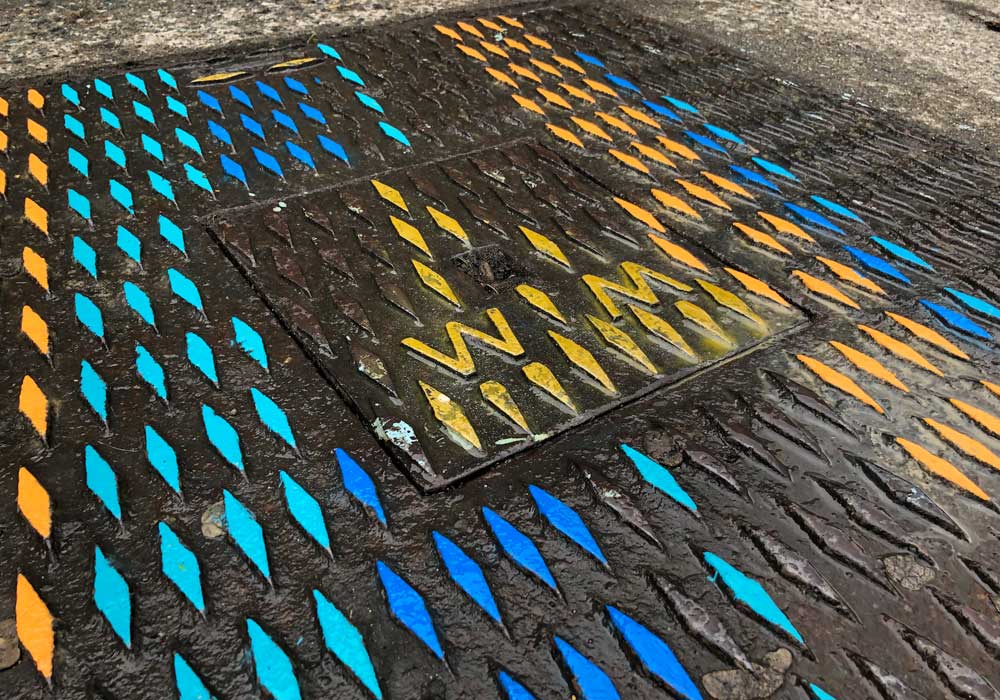 That gave me a half-day to reconsider my mockup which turned out to be a blessing in disguise. I changed the plan, waited for the rain to stop, and went back for round 2 on the large cover. 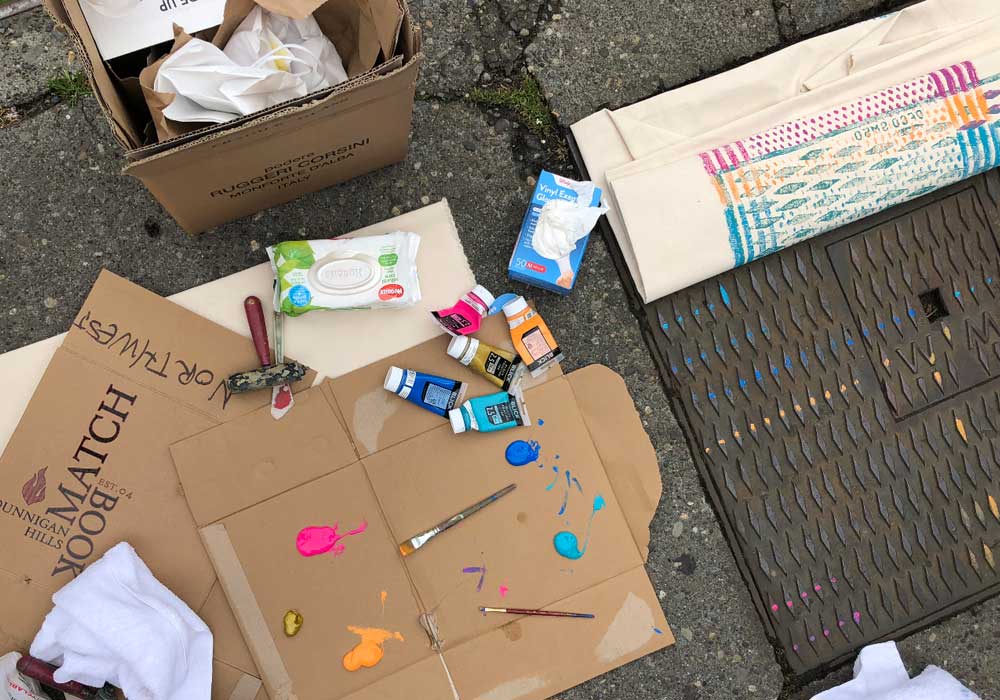 I didn't want to alter the original pattern I had made from the first two layers so only painted part of the over. In the end, that was a crucial, last-minute audible. 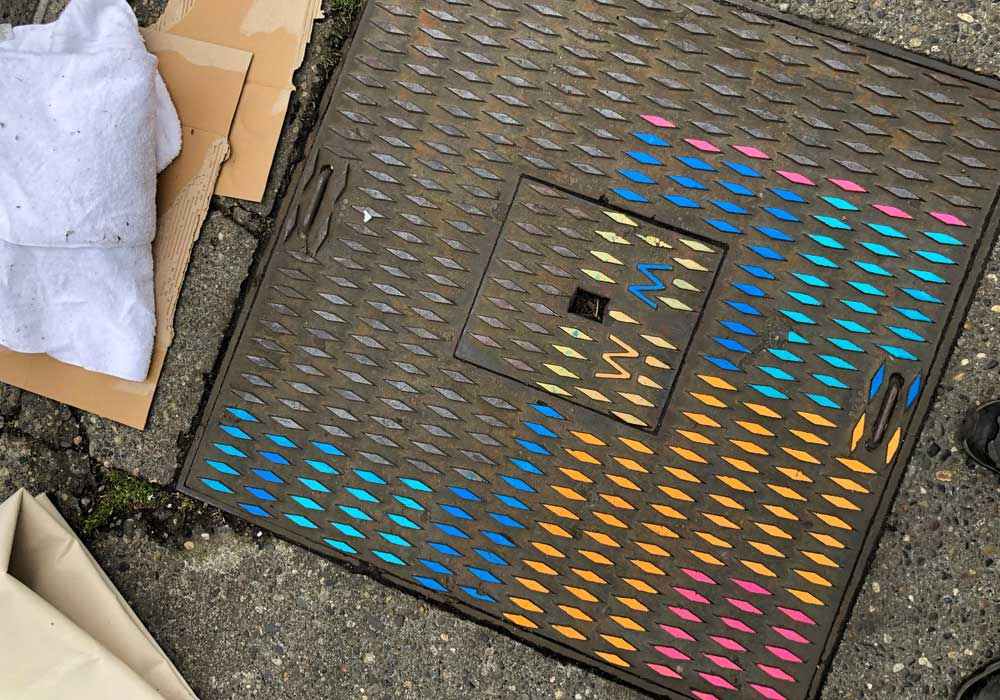 The moment of truth!

I'm not sure if the brotherly inspiration, the rain delay, not finding the original cover, the alignments, or simple luck brought it all together. Maybe a combo of it all - either way, the stars aligned.

I was so pumped about how it came out, I decided to take it on a tour to see some of the remarkable water views in the Seattle area. 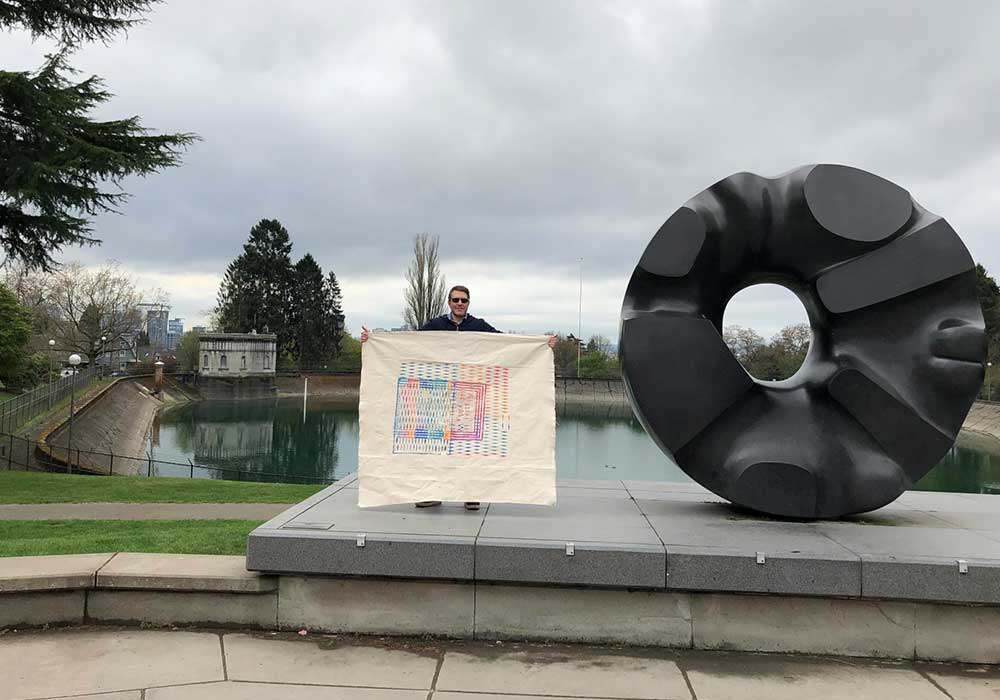 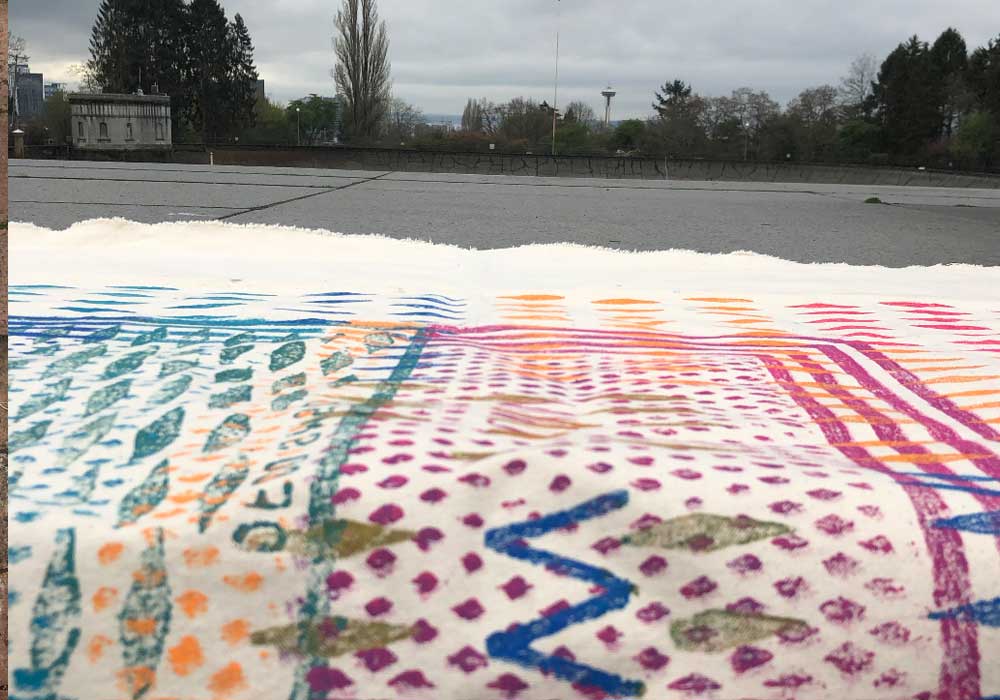 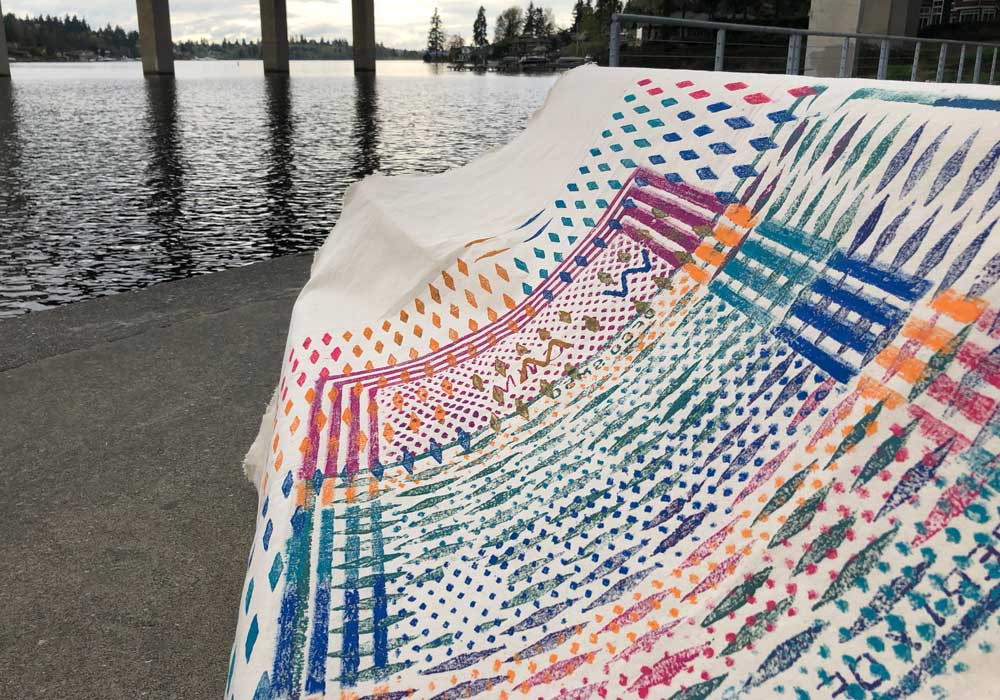 It's now one of my all-time favorites. Not only because of the beautiful patterns, but for the process, the speed bumps, and the time spent with W.M.