We started out the morning headed towards Newark. After hitting some traffic on the Turnpike, we decided to take a detour towards Princeton – a city we had not been to in decades. It’s a college town filled with mansions, estates, and a ton of money. We drove through a residential area a few blocks off the main drag and found this one. Apparently there are a series of these throughout the city with different years and designs. We double parked on the corner, got the broom out, and started to prep. A neighbor walks out and asks “Can I help you guys?” He was an older Italian guy wearing a crisp white vneck and about 7 gold chains. I am pretty sure there was a big lion pendant on one. We explained we were not casing houses – we were merely working on an art project and would leave the street cleaner than we found it. He said he did not care but the cops might and went back into his house.

We started to lay the ink and prepare the canvas when he came back out to watch. He waited around until we pulled the print, stood there for a few long minutes and simple said “That’s pretty cool, and it’s the Tigers colors.” He then told us he had lived in that house for the past 54 years. We chatted for a few more minutes while cleaning up and he explained the 1984 was an “old one” . I am pretty sure that was the most excitement he had on a block lined with white picket fences in a long time.

We walked the main streets for a while scoping future spots, then decided to head towards Trenton after realizing we were way out of our element. Like Arnold said… we’ll be back!

Original Artwork made directly from a utility cover in Princeton, NJ. 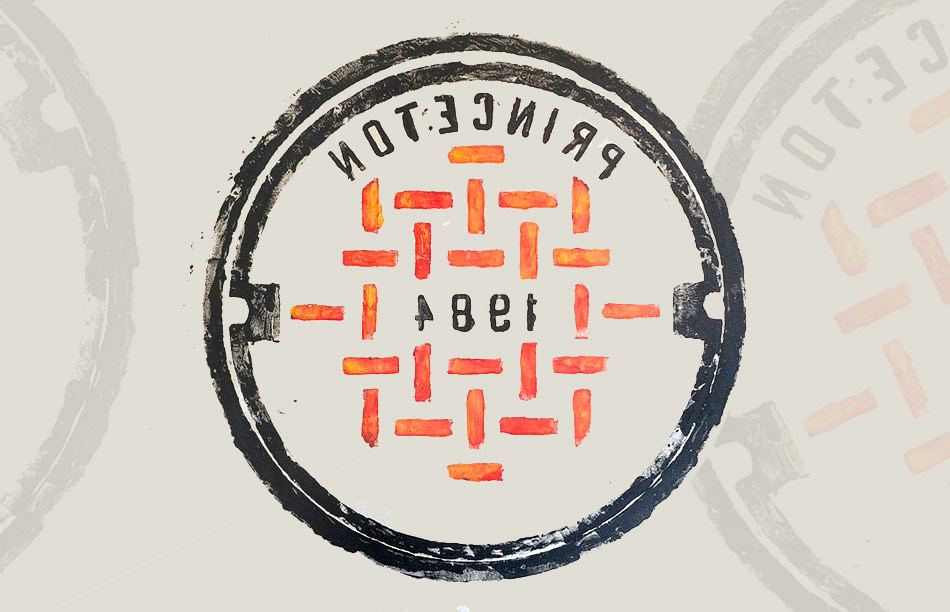