I really didn't know anything about the Capital District of New York state before this year. It's the metropolitan area surrounding Albany including a bunch of cities like Schenectady (the reason I was there), Sarasota Springs, Colonie, Rotterdam, and Troy – where I was lucky enough to stay. Besides being a beautiful area in general with rolling hills, river, and connecting waterways, it's also rich, like really rich, in history.

The area where Troy is today had long been occupied by the Mahican Indian tribe and Dutch began to take it from them in the mid 17th century. The English then stole it from the Dutch before 1700. 70 years later, the original plans were made for the village of Vanderheyden and by 1801, Troy became a village and then a city.

Through much of the 19th and into the early 20th century, Troy was not only one of the most prosperous cities in New York State, but one of the most prosperous cities in the entire country. And where did they get a lot of that cash? I wasn't surprised to learn the wealth came from iron and steel, but I was ecstatic when I read that Troy was a pioneer in the development of iron storefronts and steel structural supports in architecture - making the entire town a Mecca for antique iron - including manhole covers.

And on my first day in town, while hanging with some awesome locals, we found beauty... on the ground and in the sky. 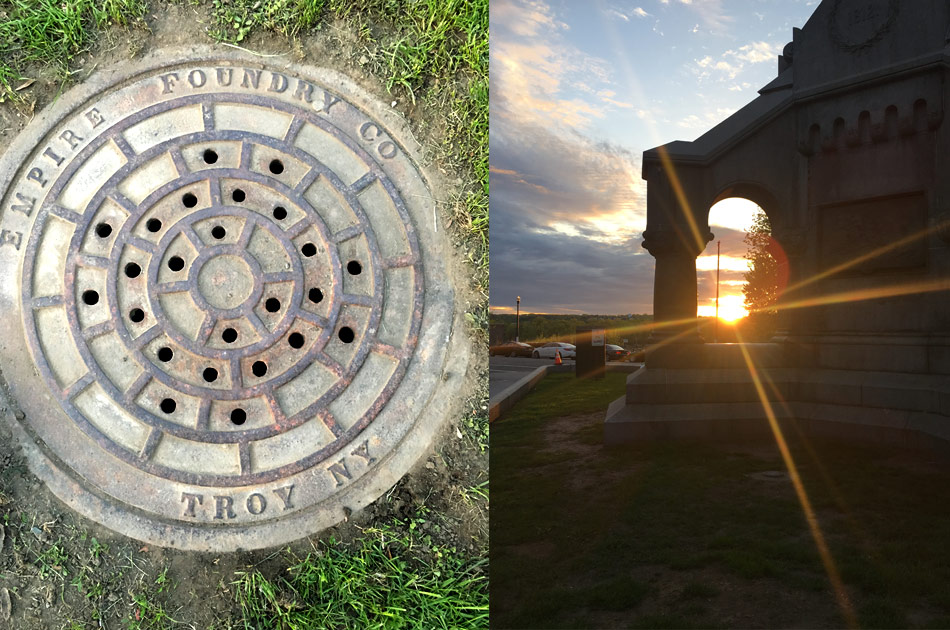 It turns out, this was made by The Empire "Stove" Foundry which operated in Troy between 1840 and 1905, changing ownerships ten times in its 60 years of business. They were one of two major players that produced high-quality stoves for cooking and heating the growing amount of homes in the area. That puts a date on this specific cover which is really cool. Even better? It's been sitting in the center of town less than a mile away from where it was designed and poured...for at least 112 years, maybe more! I really didn't care how tired I was or how bad my knee was hurting, I was not going to leave Troy without capturing that.

So after an exhausting but rewarding day with Mandi Coburn and Schenectady Public Schools, this happened. 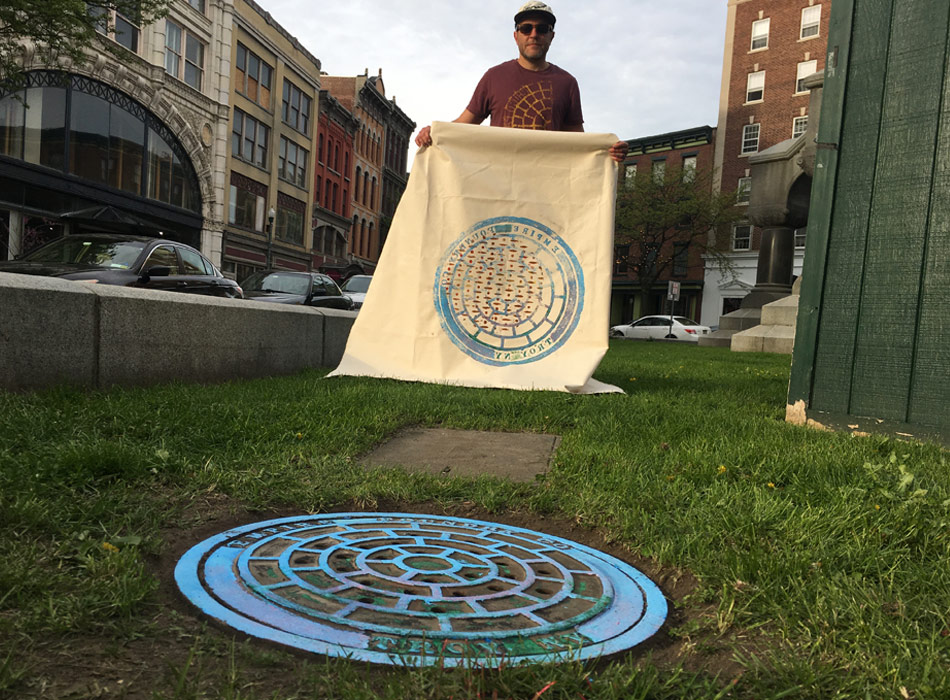 In an attempt to recreate the sunset from the previous day, I used a smaller cover for the sun and Empire Foundry cover as the sky. The canvas was pressed into the iron and my new supportive friends waited patiently. That's the moment where you're about to find out if the actual pain was worth it - the best part of printmaking and what makes it different than any other medium - the peel up!

The trip altogether was amazing – I made new friends, worked with some amazing kids, learned more than I could have imagined, and left with my new favorite print (at the time). If you have a chance to visit the Capital District, make sure you check out Troy – I'd be happy to steer you towards this piece and more amazing iron.