I love visiting a new city, wandering, exploring, and just walking with no real destination. I was averaging about ten miles a day in Paris so by the time I landed in Amsterdam, the plantar fasciitis in both feet was almost unbearable. I took a cab to the hotel, dropped the bags at the front desk, and went out in search of some new comfy shoes. I was staying in the Jordaan neighborhood just outside the city center and figured I’d find something fast - made a left, a right and headed over the first canal bridge I saw. On that block of shops, I looked over and saw the Netherlands’ Red Wing flagship store. It felt like a sign as the week before I had gone into countless shops in Copenhagen looking for a pair of Red Wing boots. I walked into the front door then saw, low and behold, a custom-designed “Red Wing Iron Works” utility cover. “You gotta tell me, what’s up with this?” Apparently, the owner of the company is “really into manhole covers” and had it made specifically for this shop (along with a handful of the other International stores). I snapped a pic, told the guys how awesome it was, checked out a couple of pairs, then decided to look around a bit before making a final decision. 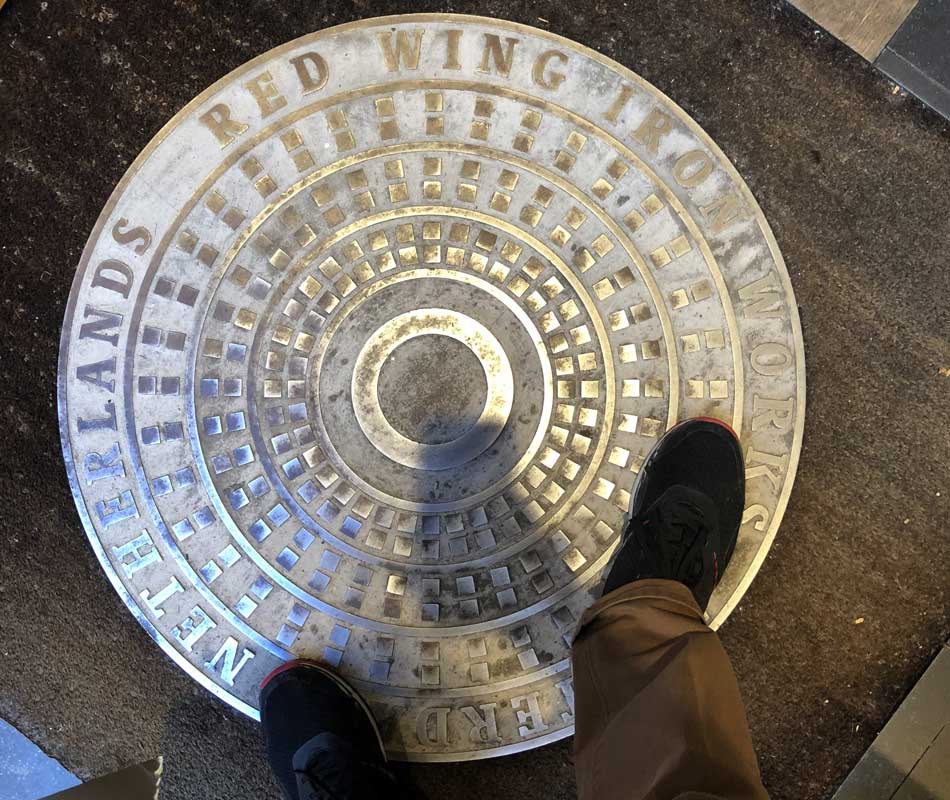 The rest of the day was spent getting lost in the small streets, the countless canal walks, the boutiques, galleries, and coffee shops. Along the way, I saw a few interesting pieces of iron but nothing that really stood out as ornate or antique - most were pure utilitarian like many other things in the city (especially the bikes).  I did notice most of the curbside drain covers had a dotted pattern with three X’s on it. At the time, I had no idea what they were and assumed it was the Foundry’s mark or logo. 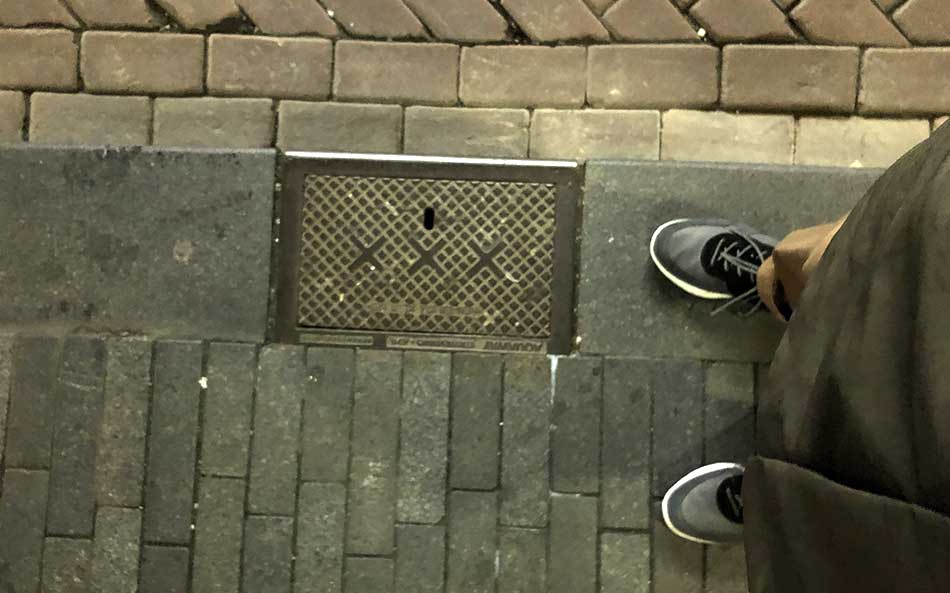 Later that night, I went to a coffee shop down the street from the hotel where they had some lighters for sale on the counter printed with that same symbol. I asked the barista, “Dude, you gotta tell me what the X’s mean.” He laughed and said, “Come on man, that’s the Amsterdam Flag!” The rectangular drain covers suddenly became iconic and there was no way I could leave without printing at least one. The first day ended by catching up with Abner, my old friend from Philly, an amazing artist, and the first creative person I made a website for. I was blown away with his current projects and his presence alone was simply inspiring. That gave me an extra push to keep this project going and it was just what I needed. 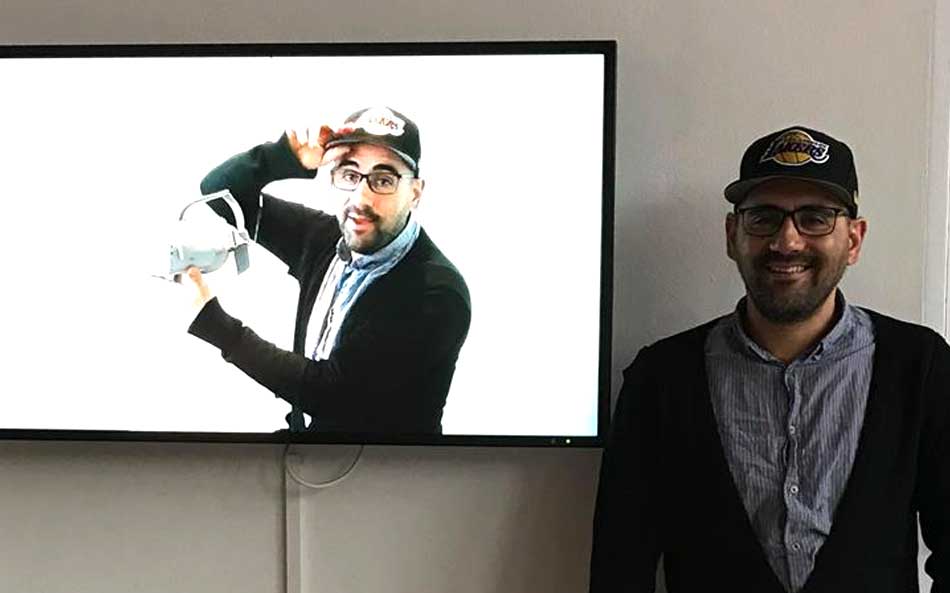 I had a canal tour booked the next morning and it was raining hard. Luckily, we were on the cutest little boat called the “Leemstar” with the coolest guide in the city. It’s a 1927 fully-restored salon boat with an electric engine and covered seating for eight. We were able to see all of the sights while the other boats were stalled under bridges trying to stay out of the rain. 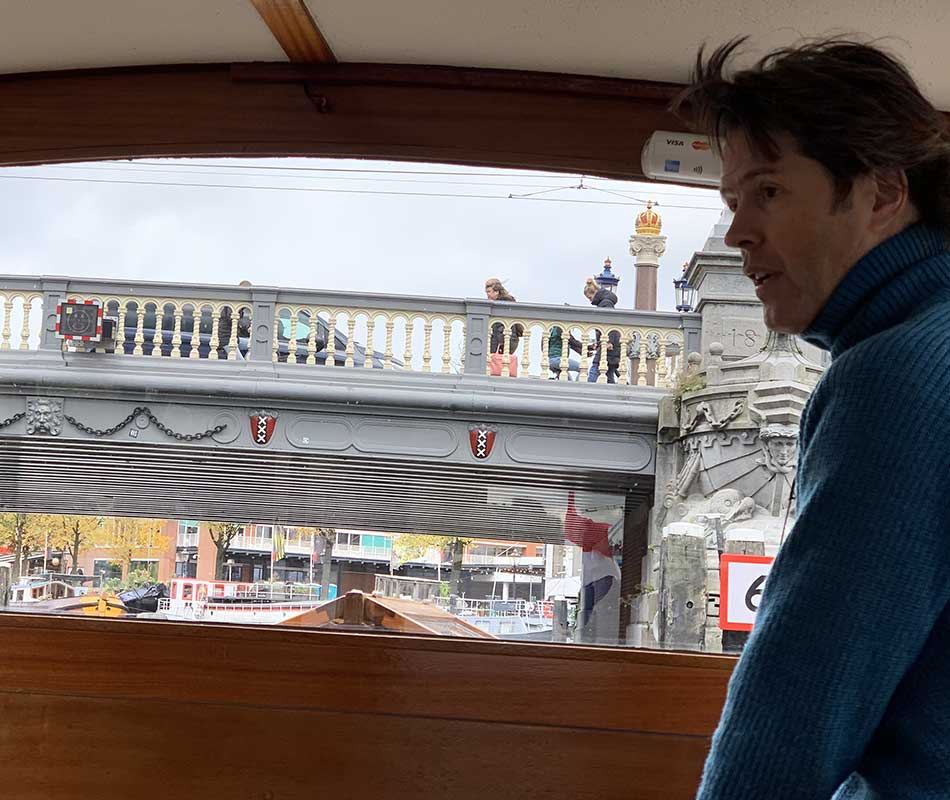 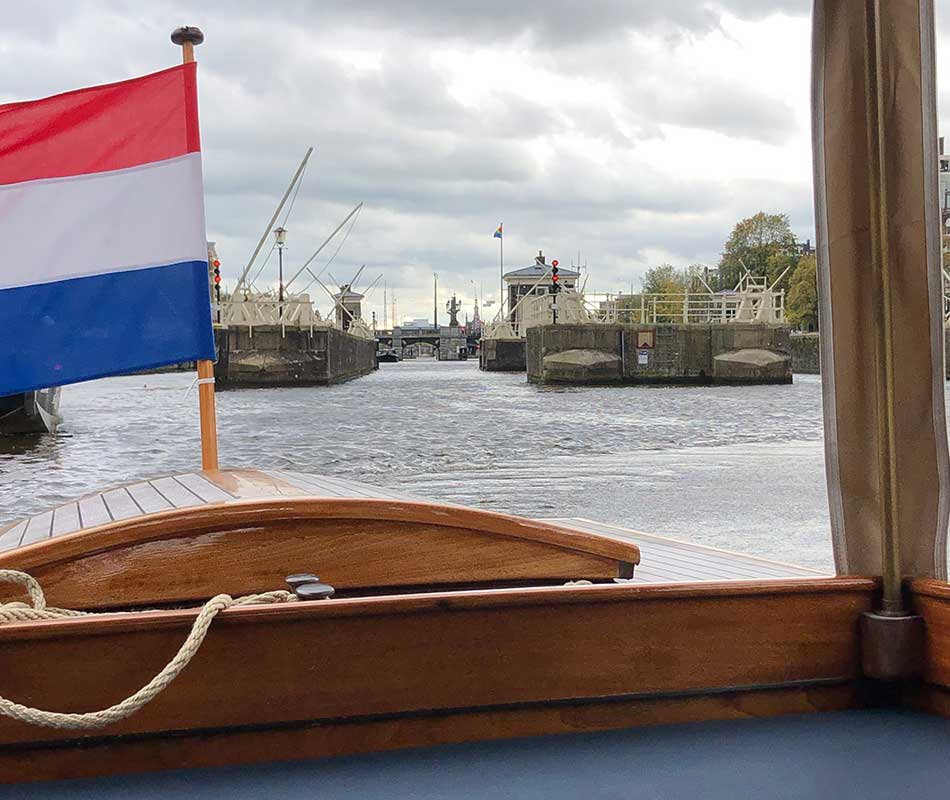 Along the way, I snapped a few pics of the flag symbol and some beautiful shots of the bridges. Later that afternoon, the sun came out for a few hours and it was my only chance to make a print. I stepped out of the hotel and walked into the neighborhood through the narrow streets of the Jordaan District. I made a couple of quick prints from a tiny gas meter cover just outside then went in search of the X's. 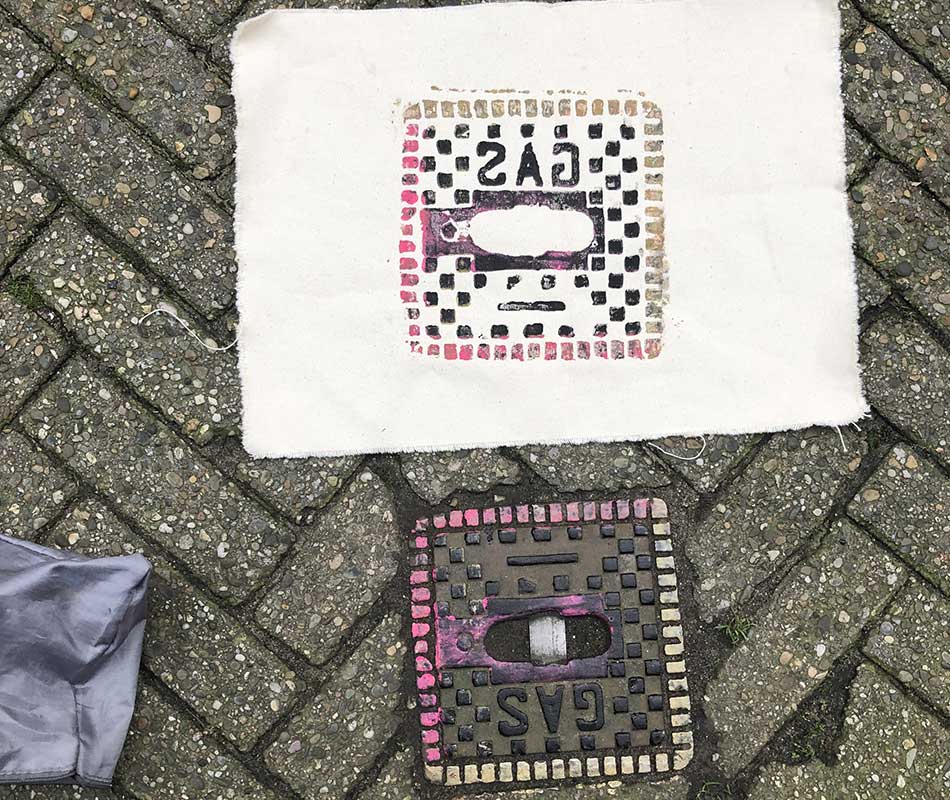 On a mostly residential street of humble row homes, I set up shop and managed to make three prints from the cover. For the first two, I only printed the center part using the colors from the actual flag. 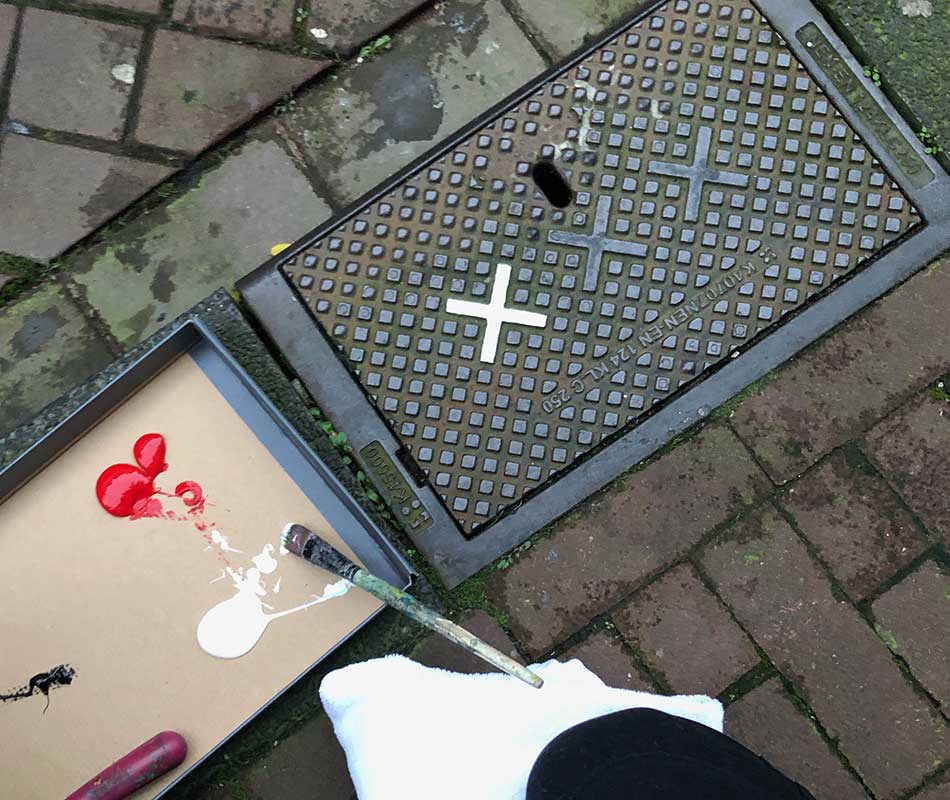 On the final print, I decided to paint the “border” in gold which only went around three sides of the cover. As the sun went down, I carried all three back to the hotel and figured that was the end of my Amsterdam print mission. I was okay with that. 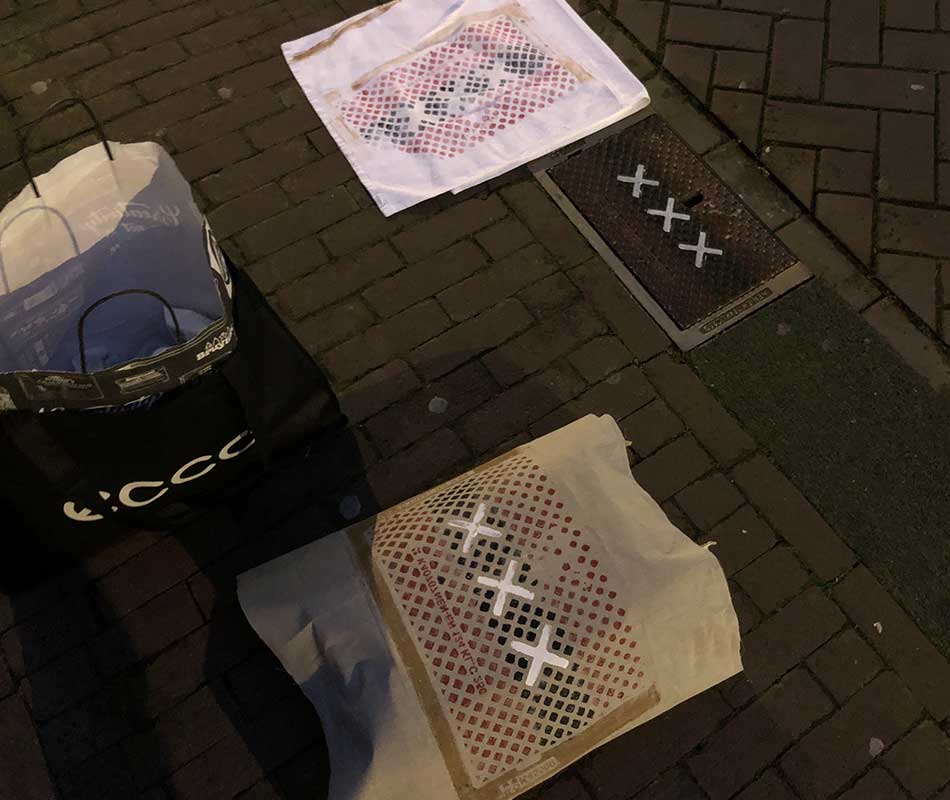 It was my last morning in Amsterdam and my feet were just as sore as the first day. I decided to go back to the Red Wing shop and try on a few pairs. Again, the custom cover became the topic of conversation. I showed Steve and Mitchell some photos of my prints to explain why I was so excited. Steve says “What are you doing at 6 PM today? If you want, come back after we close and make a print of it. We would love to have one if possible!” I was tired, I had limited ink, was on my way to the Van Gogh museum, and didn’t think I had that kind of energy. Then the “Can’t stop, won’t stop” mentality kicked in and I replied, “See you guys at 6!” I searched for an art store to re-up on some red and black inks. Luckily, Van Bleek was pretty close to the museum and the clerk there was more than happy to help find a replacement for my normal brands. 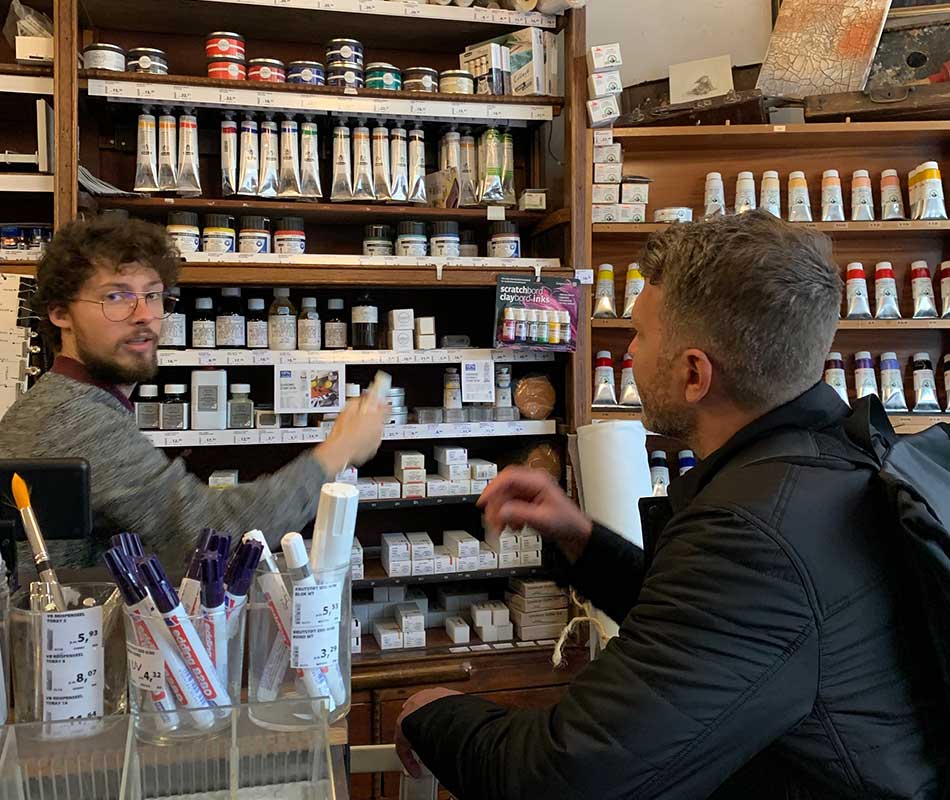 On the way back, I scrolled through photos from the past couple of days. I stopped on this pic of the canal bridge and the idea hit me - I can print part of the Red Wing design on top of the drain cover from yesterday to make it look like a bridge! 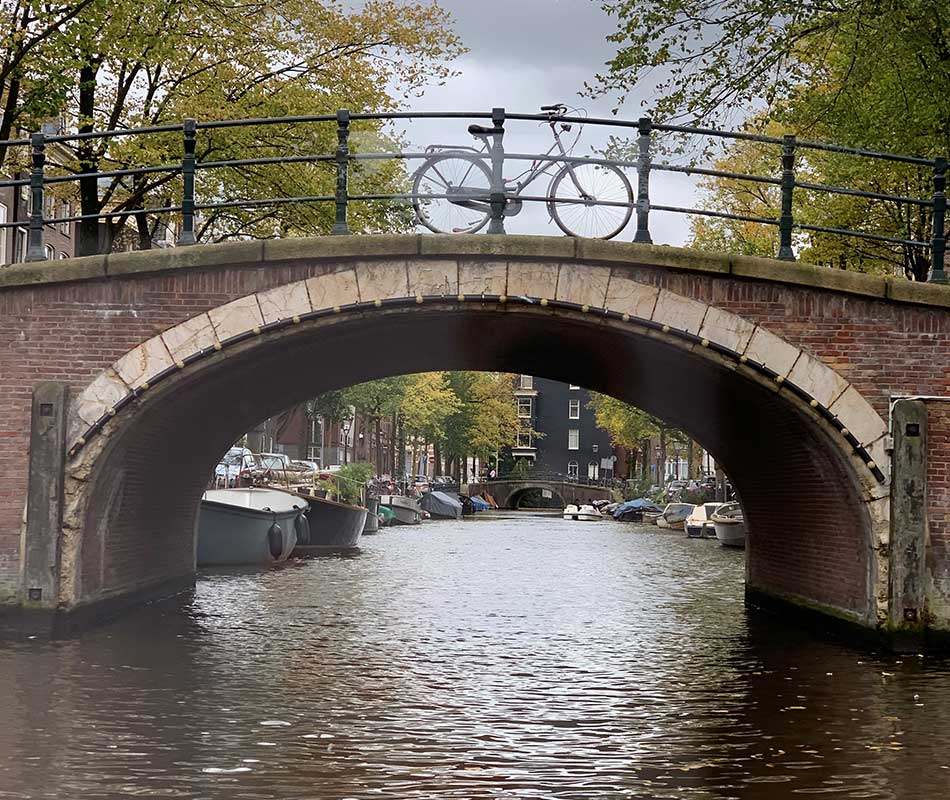 I got to the hotel around 5:30 with just enough time to throw the supplies in a trash bag before heading back to the store. I knocked on the glass and Mitch let me in. He had been there all day and I’m sure he was ready to go home. I said to him, “I know I told you it would take about 20 minutes, but now I have an idea and I’m thinking it’s gonna be at least an hour or so. We don’t have to do this if you want to go home.” Mitch looked over, handed me a beer, and said: “Let’s do it mate!”

I pitched the concept, showed him where I planned to print the second layer and had it all ready to go. He loved the idea but suggested I flip the canvas so the open space was at the bottom since it actually looked like the canal with the ink drips and running water. I’ve asked people for advice on the street many times over the years and usually, it works out. This time, his idea was brilliant - I gladly flipped the composition and got started. 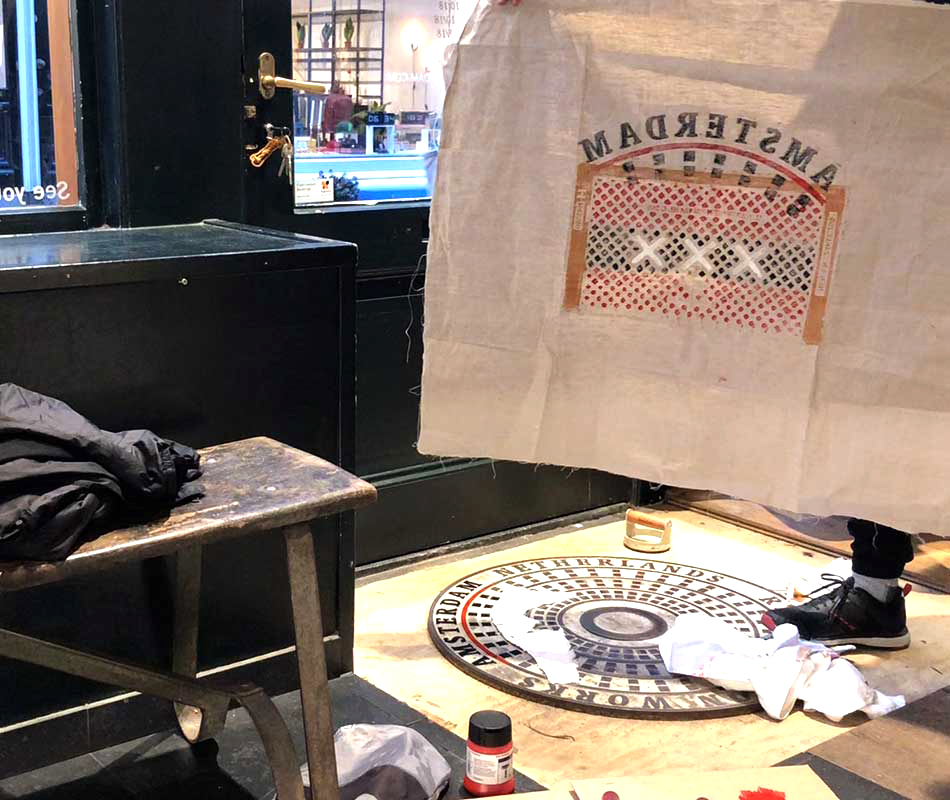 I painted and printed about 1/8 of the cover with just enough to reach the border edges and complete the arch of the bridge. At that moment I felt like Hannibal from the A-Team and loved how our plan came together. I had one small piece of linen left so I made a print for Mitch a print to thank him for his time and the brainstorming session.

After that, I painted the whole cover using red and black inks inspired by the Red Wing logo. We talked about life, art, traveling and everything in between. I told him London was the next stop and he suggested I visit Brighton if I had time. 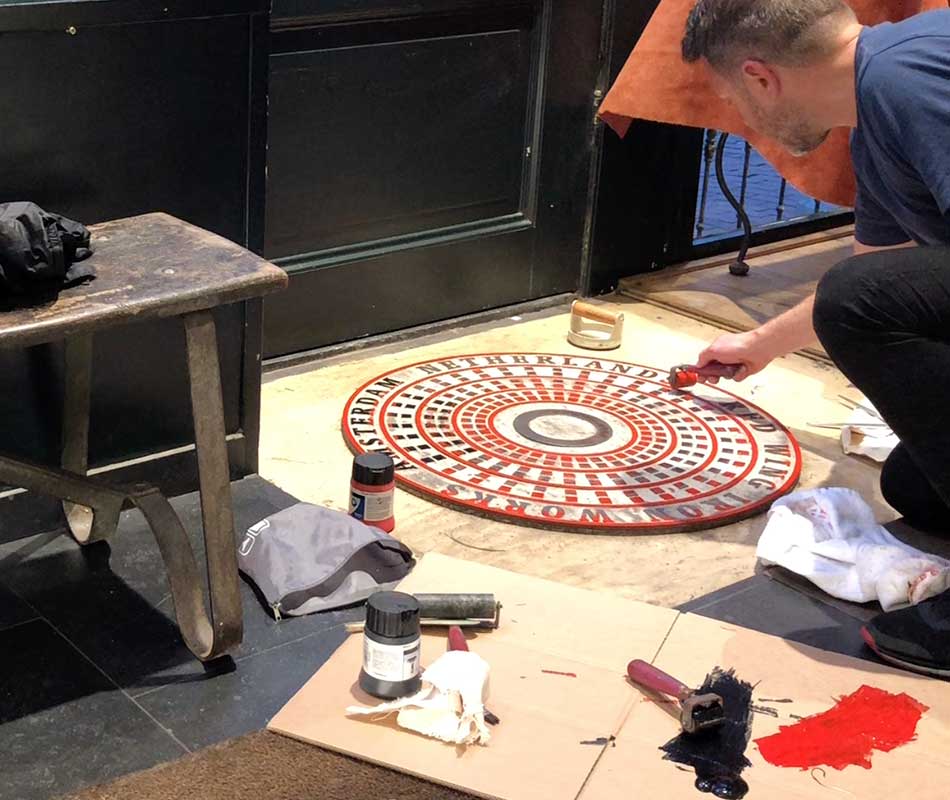 We were almost two hours past closing and I figured Mitch was getting sick of me. But when I pulled up the final print, he was just as, if not more excited than earlier. We sat there for a few minutes together as I caught my breath. He kept saying how “f’n awesome” it was and I couldn’t help wanting to give him a big hug. I was sad to say goodbye. 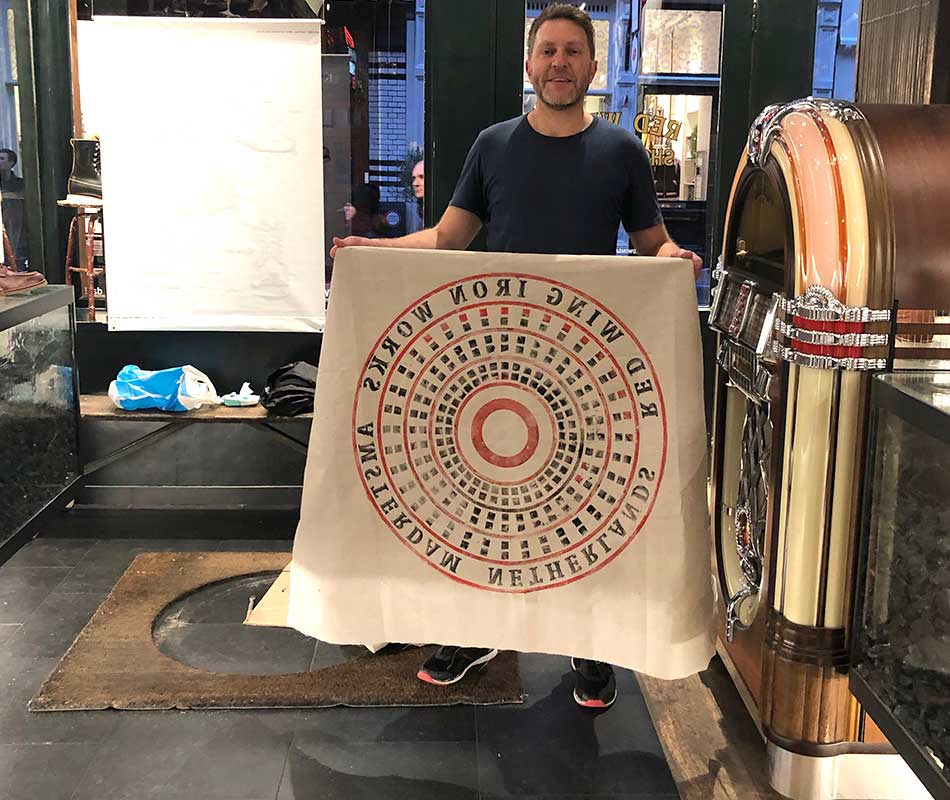 I cleaned up the cover the best I could, pulled the mat back over it, left the full print on the floor to dry, and headed out on to the street. 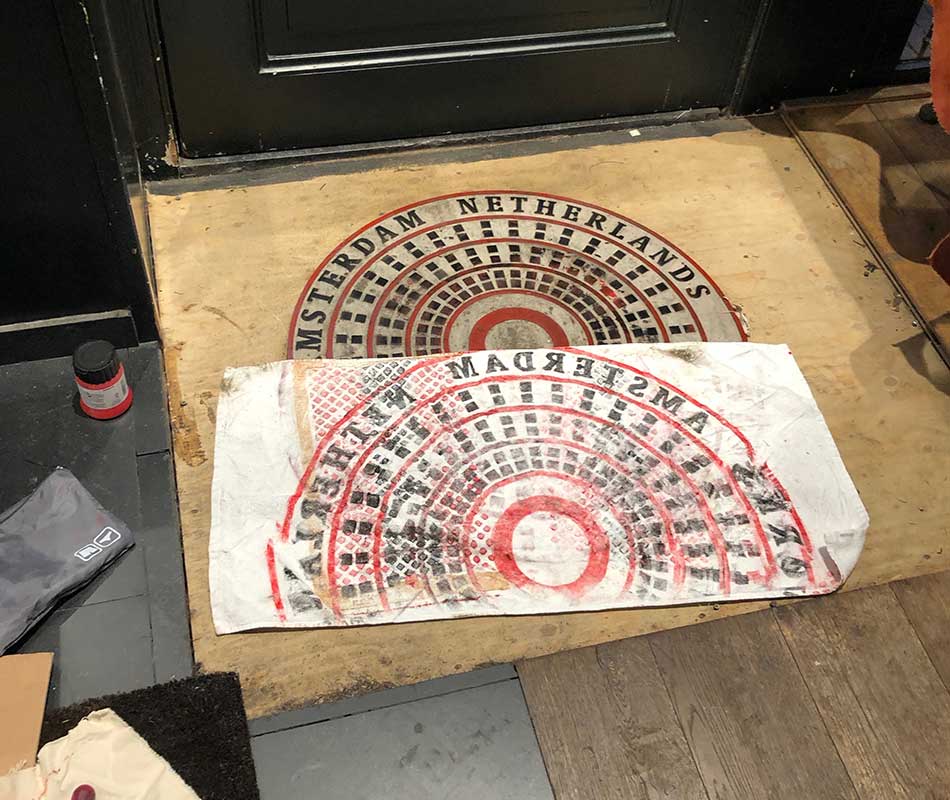 In less than 8 hours, I managed to complete a layered print, change my travel plans for the following week, and make a new friend. There’s no possible way I could have made this story up and it still feels surreal even to this day. I’ll never forget the experience, the way it all went down, and how awesome Mitch is. If you’re ever in Amsterdam, stop by the store, see the print I left there, and meet two of the nicest guys ever! 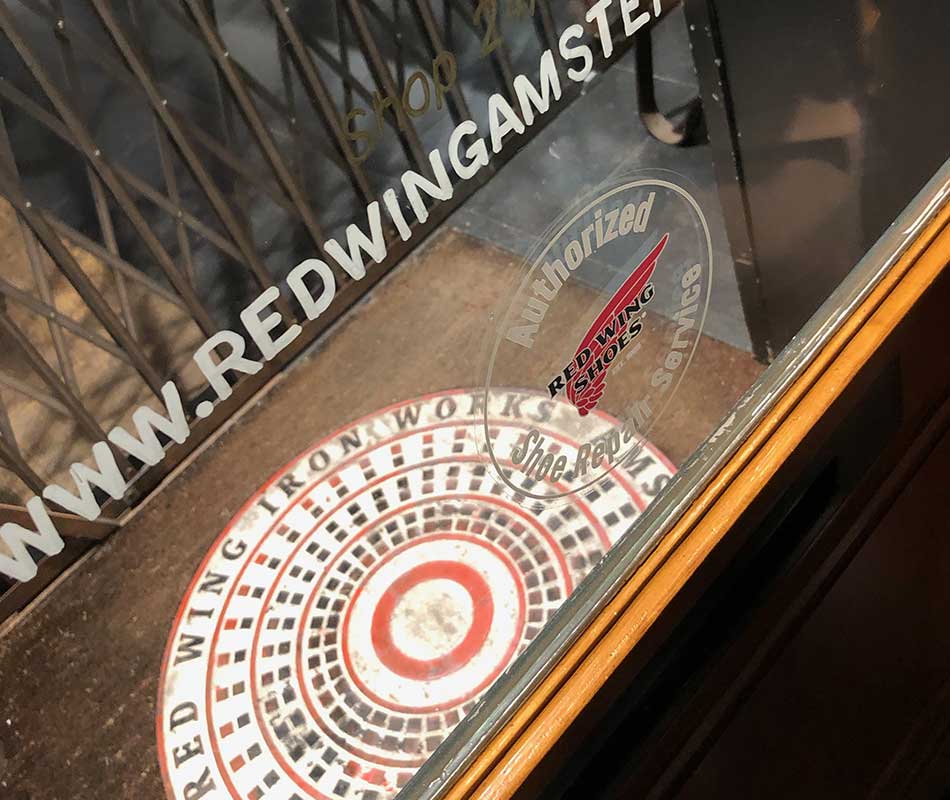 My Grandfather immigrated to America from the Netherlands in the 1920s. He passed away before I was born so I never had the chance to meet him but always wanted to see his home town. I heard it was a beautiful city full of kind people, amazing art, and delicious food – it did not disappoint. I’ll always be grateful for the opportunity to paint the streets he walked on, explore the neighborhoods he enjoyed, breathe the same air, and return home with the ultimate memento. 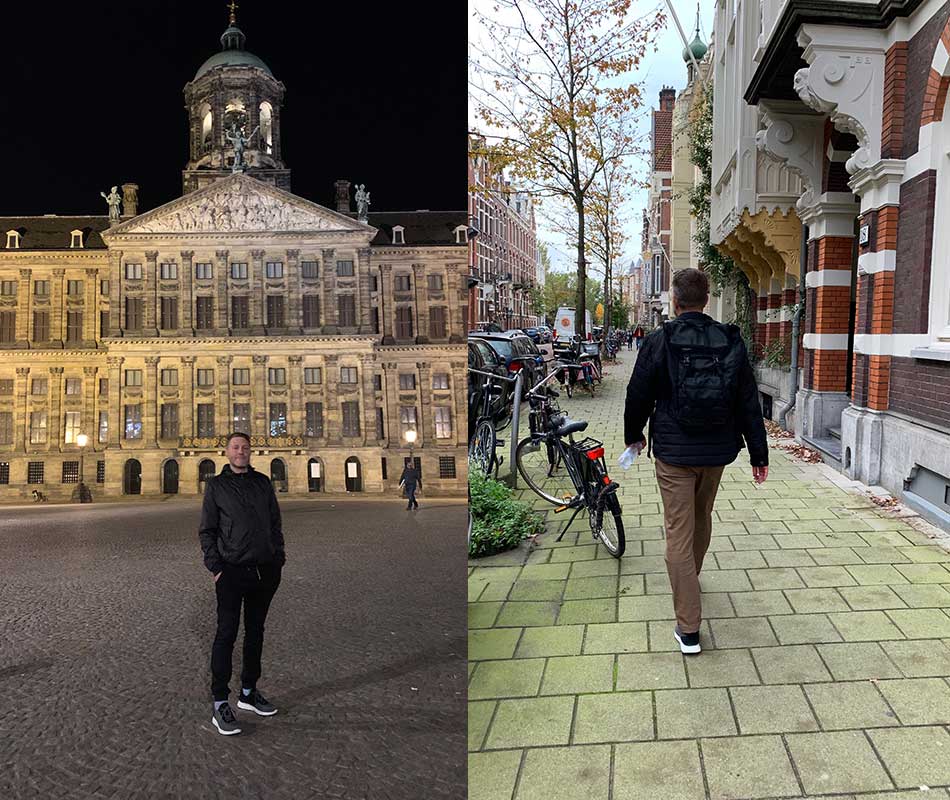 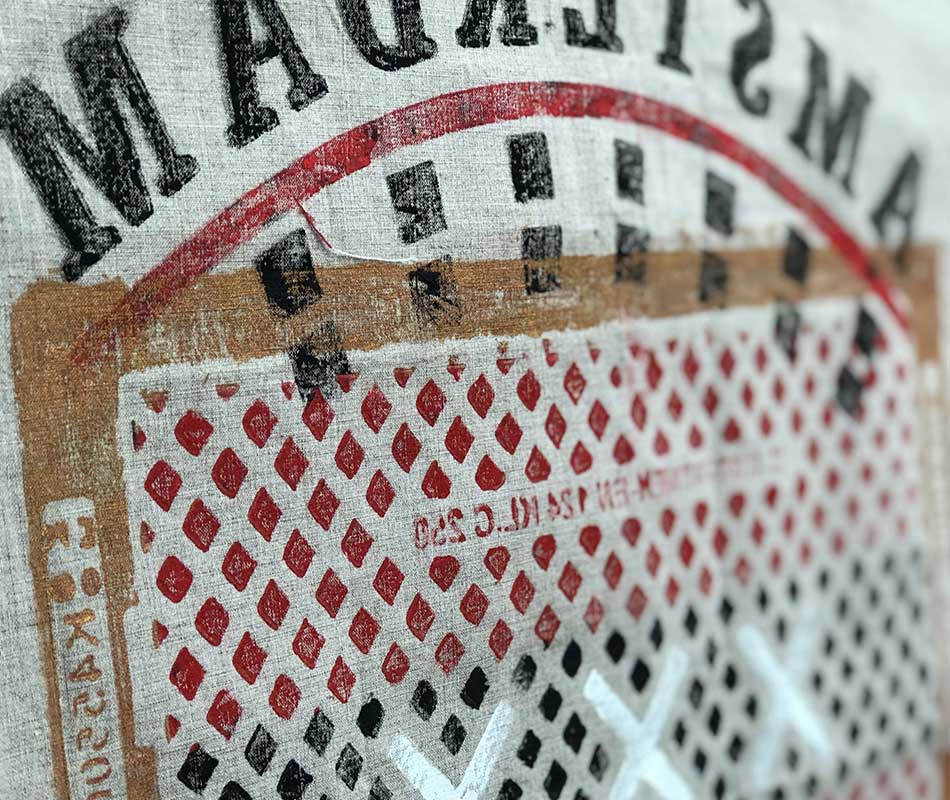