I woke up before the sun and started packing the car up. We had spent the last 48 hours stomping around New Orleans after exploring Atlanta and Birmingham the days before. Zach was flying out that morning and we had plans to be in Nashville for the night. I had never been to that part of the Southeast and was itching to see another city. By chance, a stranger from Philly sent a message saying “You need to look up Jimmy Ogle in Memphis.” I searched his name, got excited, looked at a map, thought it was a lot closer than it actually is, prepared some canvas, and left a “Meet you in Nashville” note.

I drove to Memphis and met with Jimmy which is a story in it’s own. It was amazing, but it did drain about twelve hours from my day and every bit of the immune system I had left in my body. After making a few prints and taking an impromptu tour with Jimmy, I headed towards Nashville. The sun went down, the sky was black, and I was STILL driving. That’s where I got sick and maybe the last time I had a serious flu – actually all of us ended up with it at some point. None the less, I was able to catch up with a dear friend that night and get some rest. 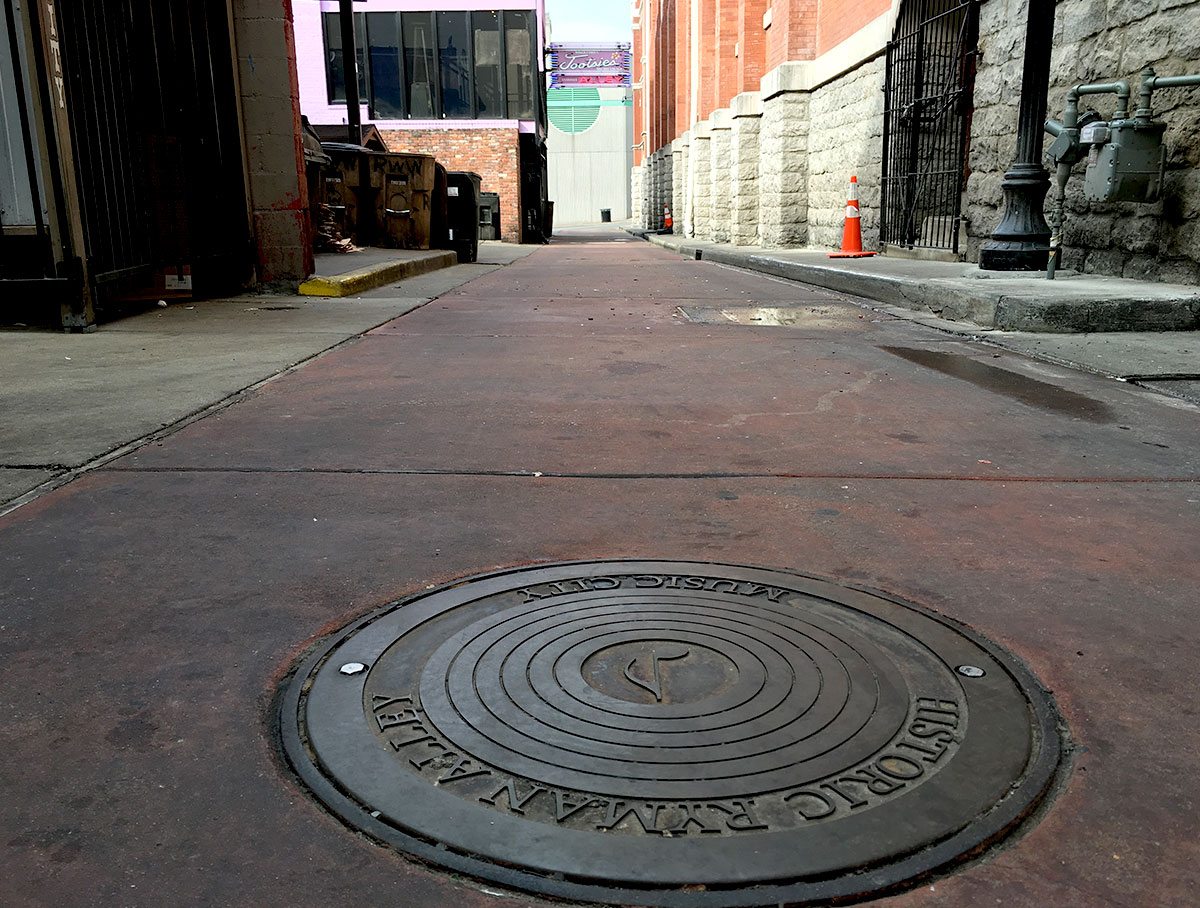 Unfortunately, I had zero energy the next day and symptoms were getting worse. I had to decide between the main tourist attractions or finding something to print. Weighed some options and decided I’d search the streets a bit – within ten minutes I walked past this cool looking alley while noticing the sign for Tootsies and Ryan Auditorium. It was early in the morning and I was one of a few people wandering around. That’s usually not the time I’d explore an alley, but those signs kept drawing me in. It turns out I was standing in front of Country music’s most famous alley which is right behind Country music’s most famous venue – the Ryman Auditorium. I like a little twang here and there but not enough to understand where I was. I found this piece of iron halfway through the alley and I was more interested in the word “Historic” than “Ryman” – and the sweet design of an actual record. Let’s not forget the “Music City” text across the bottom. 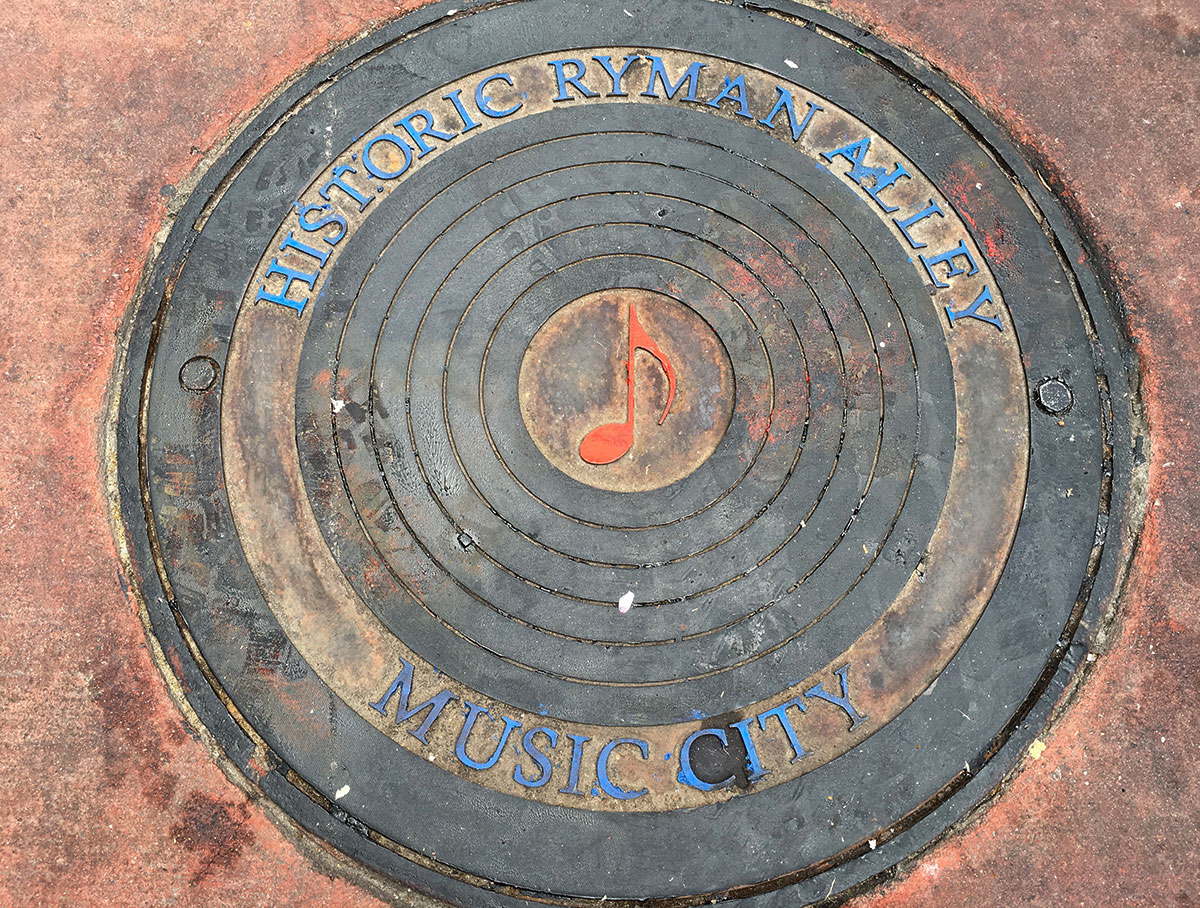 I was feeling physically worse by then, but that find helped me muster up just enough energy to make a couple of prints. For the first print, I got literal with the black record while adding the red and blue as accents. An hour or so later, I was carrying the single print through the hotel lobby. I sat in the room and stared at it for the next hour, still feeling weak. 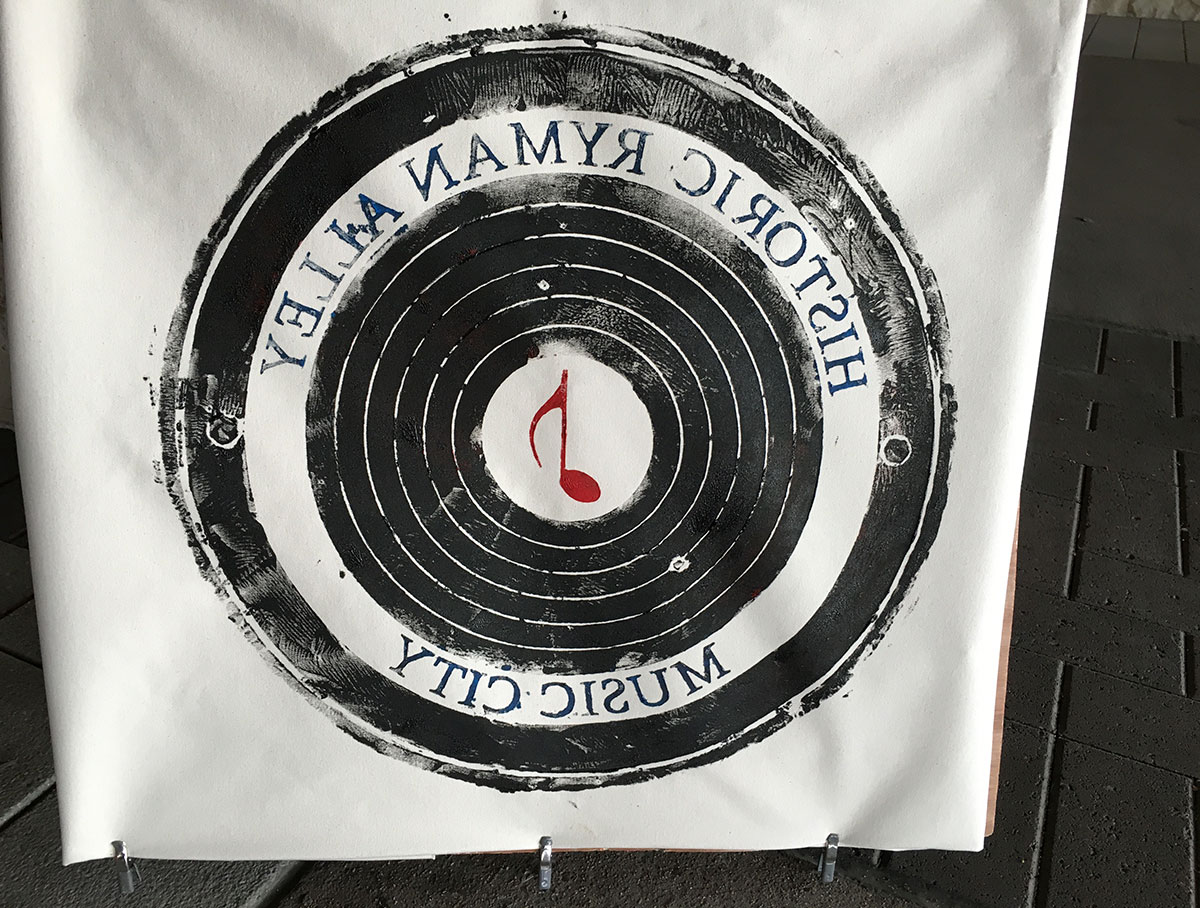 The “when is the next time I’m going to be here?” thought popped in my mind and I went back for round two – this time using bold, bright colors opposite of what a record or the alley actually looked like. It was late morning by that point and the alley was starting to get some foot traffic. The workers from the bars that line the surrounding blocks were having their smokes and morning coffee. A few of the locals told me about the alley and how I was standing on, and painting on, one of the most infamous spots in the region. They stuck around long enough to crack a few manhole jokes and watch me peel up the second print. 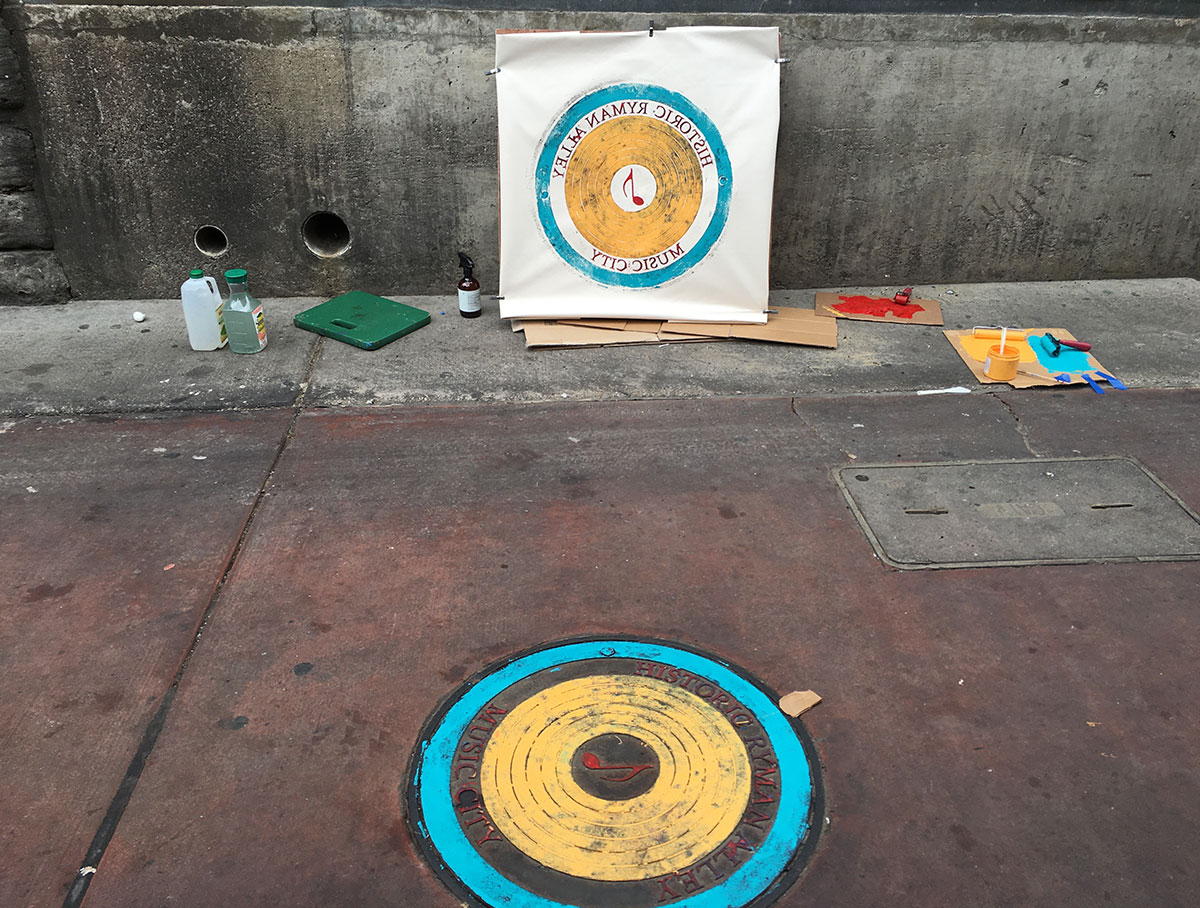 At that point, all I had enough left in me to get the things to the car and my body to a bed. I spent the rest of the day sleeping, sweating, shivering, and planning how we were gonna make it back to Philly. It took two more days in motels across West Virginia and Maryland to make it back. That was four years ago and I’m not sure I’ve seen or thought much about these prints since. It was one of those trips you want to forget and remember at the same time.

It was cool to know I had a print from such an iconic place. The Ryman Auditorium – Country Music’s Most famous Venue – Home of the Grand Ole Opry from 1943 to 1974. I started looking for photos and some history behind the Ryman which was interesting until I learned they told Elvis to “go back to Memphis and drive a truck”, there have been only three black recording artists to perform on stage, and there are just two honored backstage: Chuck Berry and Darius Rucker. 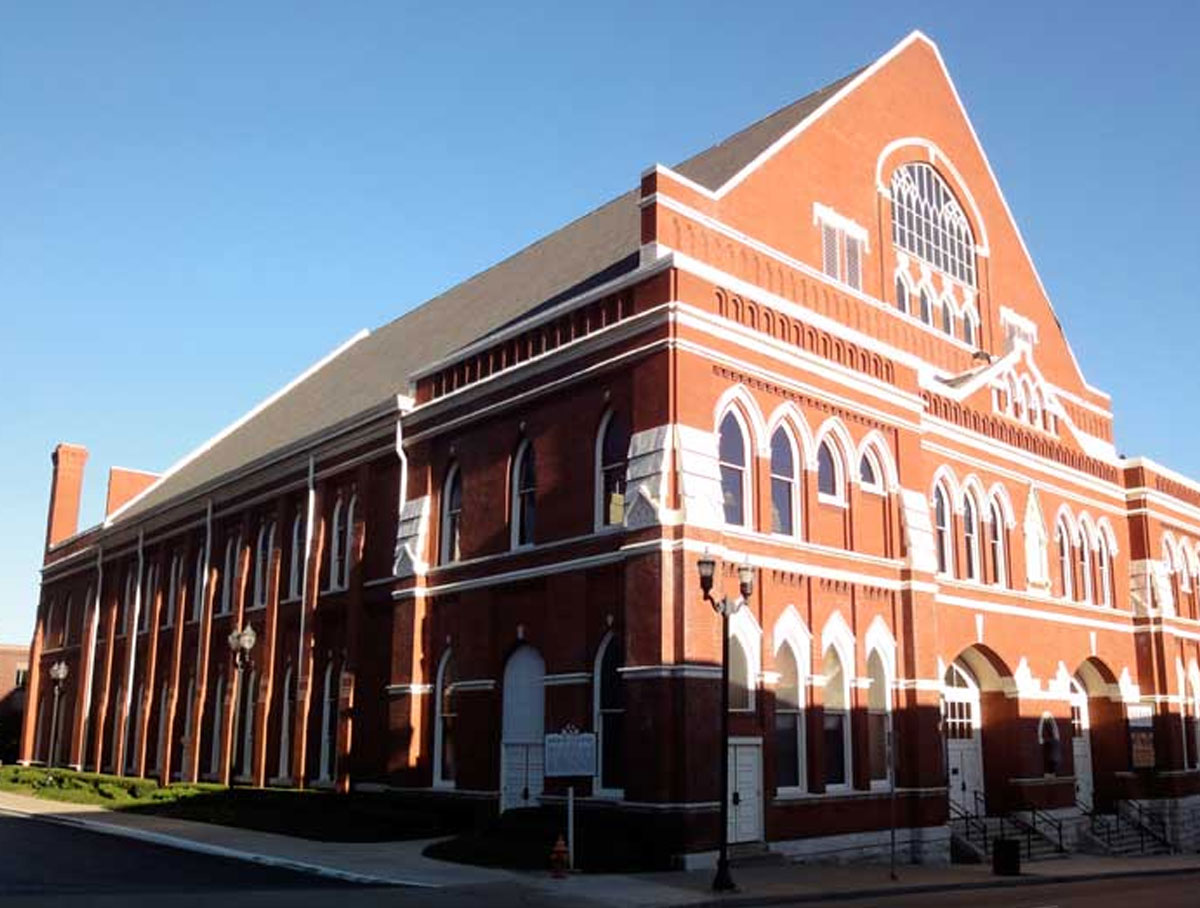 I understand there are far less non-white country music artists, but there’s a good argument that so-called black hillbilly artists in the South had been performing a stringy style of music at picnics, dances, and parties since the l890s. When the commercial recording industry started to grow in the 1920s, consumers and products were segregated by selling “black music” (blues, gospel, jazz) to black people and “white music” (country, hillbilly) to white people when essentially it was the same at that time. The Grand Ole Opry went on to be the Mecca of country music from 1943 to 1974 and the Ryman has continued that tradition.

I started to research old photos and stumbled across a billboard from 1944 – the second year of the Opry. At first glance, I was happy to see a few black people – until I zoomed further in to realize it’s just two white guys wearing gloves and black socks with shoe polish on their faces. Then I felt sad. This seemed more than acceptable – it was funny, demeaning, oppressing, racist, and very normal. It was 75 years ago and my father was started to learn his way around the world.

I woke up this morning looking for some history which led me through a mixed bag of emotions. Up until a couple of years ago, I had no idea what the black face meant. I was fortunate enough to be raised blind to color and that type of thinking was never introduced in my house. But we know it still exists in our county and the world. Rather than being sad or angry, I think we can celebrate strides the past couple of generations have made including the artists and musicians leading the way. We can think about the next generations and what we can do to continue those. I’m happy I muscled through that day, made the print, and learned what I did.

I’m also happy to see how we can help shape the next generation. 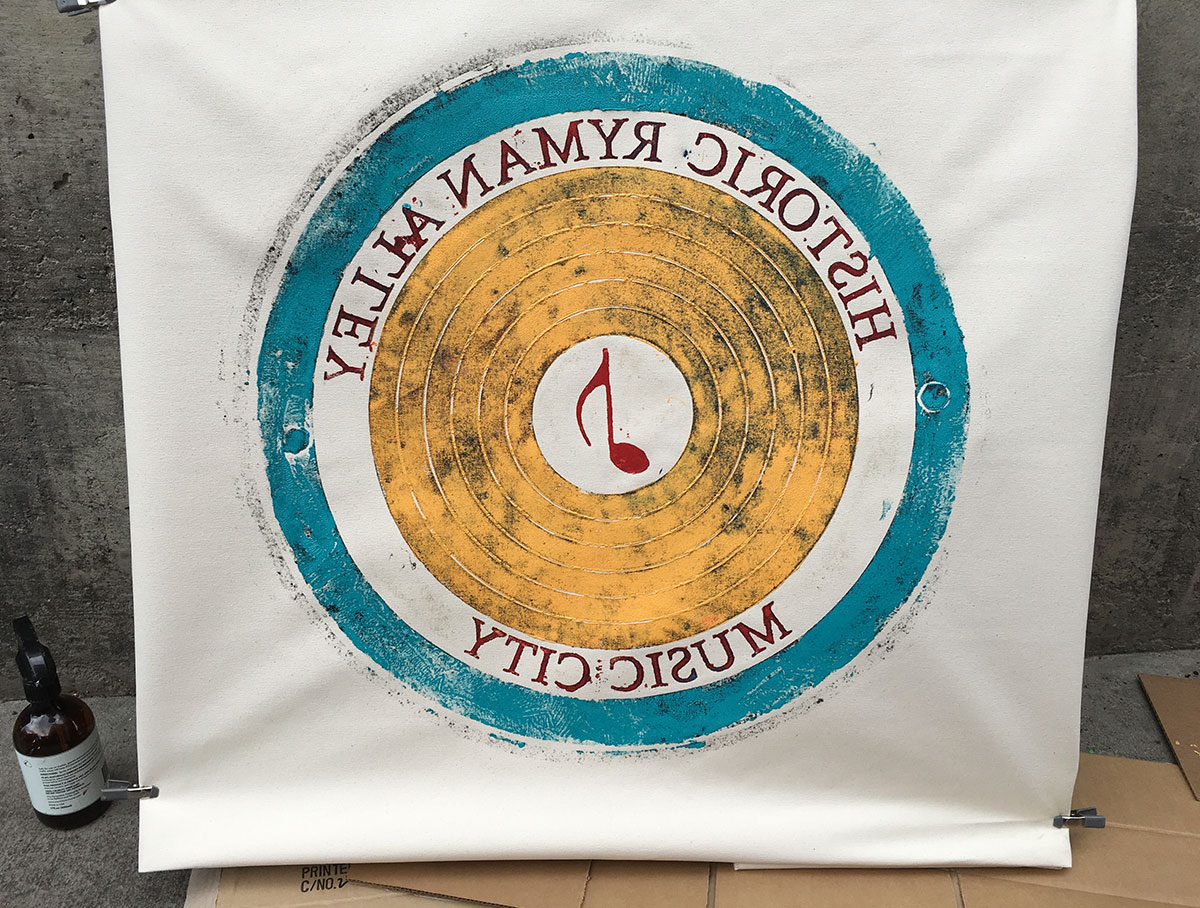