I’ve made a few prints of this particular cover in Bucktown, a neighborhood in Chicago. I believe it’s an old coal hole cover dating back to the early 1900s and it reads “Richards & Kelly Co. Chicago, Illinois.” The small circles would have been glass inserts allowing the light to shine down into the basement when closed. They’re all gone now, mostly filled in with concrete. There are a few cracks in the outer rim. It’s a beauty. I wanted to make a couple prints on canvas so I headed there, even though there was a storm in the forecast.

Half way through the second print, a local walks over to see what’s going on. I was surprised it took that long – usually people stop frequently when I’m working. Turns out the guy’s been living across the street for the past 40 years. His name is Richard and he gives me a rundown of the neighborhood. What’s now a public path was once the railroad that carried goods out of the neighborhood. There were machine shops, factories, and small apartment buildings for the workers. The business owners lived just south in the larger buildings around Wicker Park. 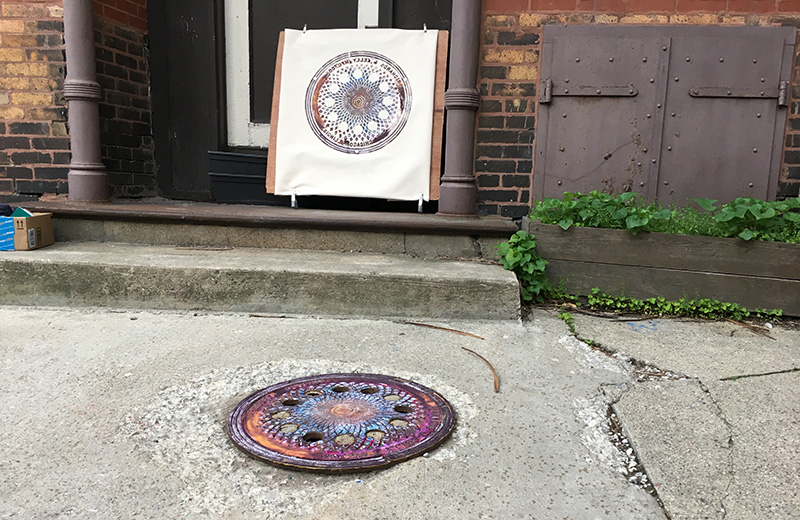 The building we’re standing near went through many phases. It was once Richards & Kelly Manufacturing, a wood shop, and a local watering hole for over 20 years – Richard’s Tavern. The front steps even bear the name of a A. Bolter & Sons Illinois Iron Works, which may have actually poured the metal steps from the cover. This cover and design has been a fixture for generations. 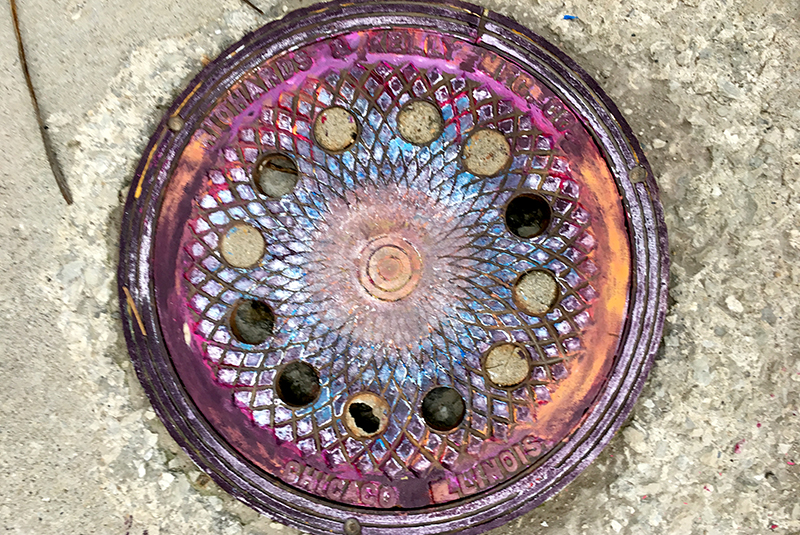 So I end up making a print of Richard’s and Kelly, in front of Richard’s Tavern – with a man named Richard. This is the first time he ever noticed the cover in the 40 years he’d spent walking that sidewalk.

Now my knees don’t hurt anymore, and I have just one question… which print will I give to my new friend Richard?

Original Artwork made directly from a utility cover in Chicago, IL.