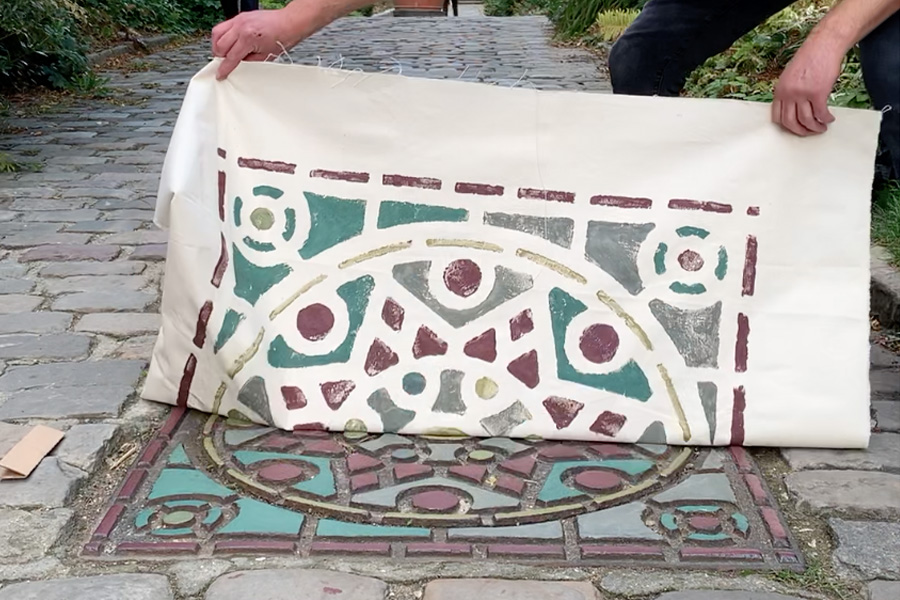 On my first day in Paris, I noticed “smiley face” designs all over the sidewalks. Many were worn down so much that you could barely read the text. The more I found, the more I could see the graphics and typography. Turns out they are Victor Popp utility covers. In the late 1800s, Popp created an underground network that controlled the public clocks positioned throughout the city. Every 60 seconds, a pulse of compressed air was sent through the system changing the minute hand on the clocks. Super cool piece of history and a design that makes you smile each time you see it. I’ll be sure to hang with Mr. Popp next time I’m in Paris. 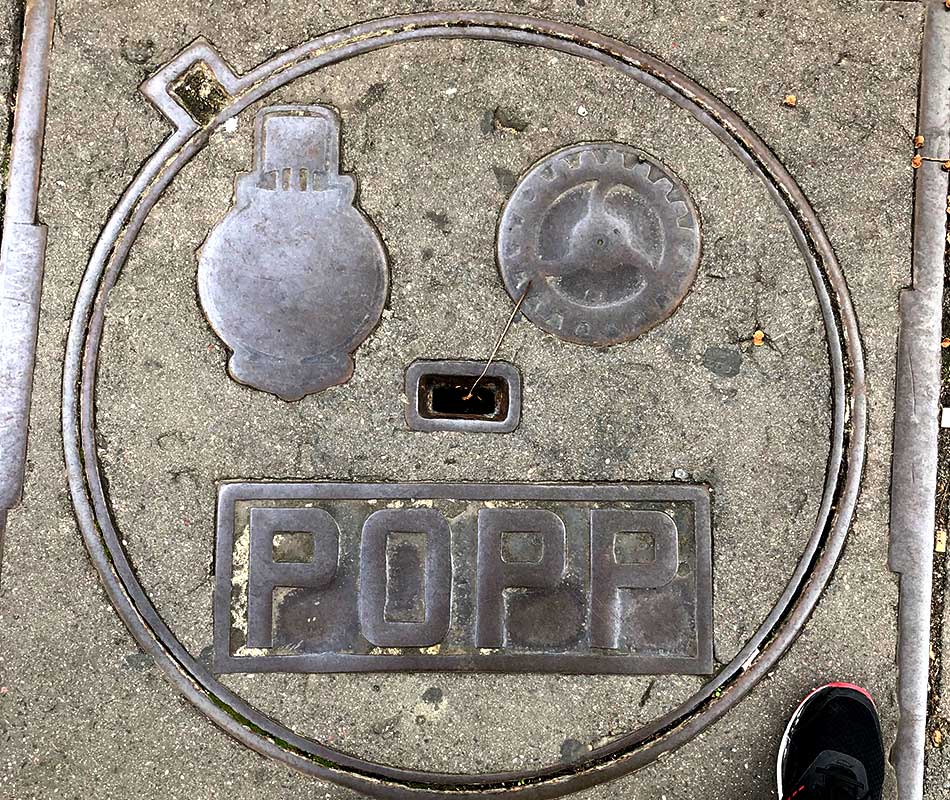 When I first joined social media, Christophe (@streets_greens) was one of the first few people I started to follow. I loved his approach to capturing street iron, the beauty of nature mixed with infrastructure, and his eye for design. At that time, I never thought I’d ever visit Paris, yet alone meet him for a morning of exploration. We had lunch at a 400-year-old street market and explored the streets for a few hours. That day, I stopped to snap a pic of this “Pont-à-Mousson” text and he opened my eyes. I’ve seen “PAM” covers all over the world. The ones back home seemed modern so I never really paid too much attention to them - they’re mostly in gas stations and industrial areas. Christophe told me about Pont-à-Mousson and how they started in France and have been casting iron for cities and towns all over the globe for the past 150 years. 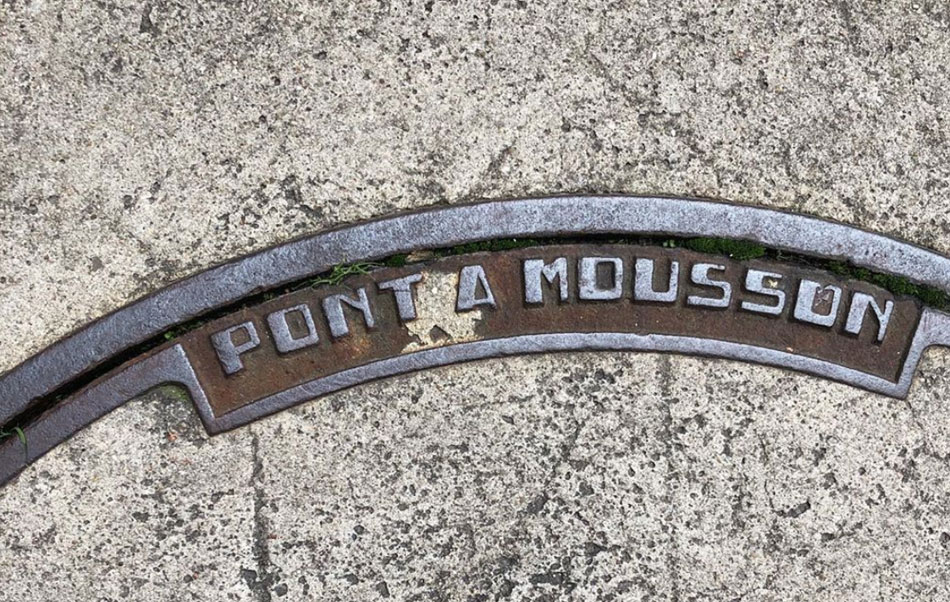 I found these two during the stroll with Christophe (@streets_greens) and spent the next couple of hours deciding which one to print. I had one piece of Canvas left and the deciding factors were – a sweet pattern or something that said Paris for – a really tough decision for a normally indecisive person. I went back to the hotel, threw the supplies in my bag, and headed out thinking a last-second decision would be the best bet. 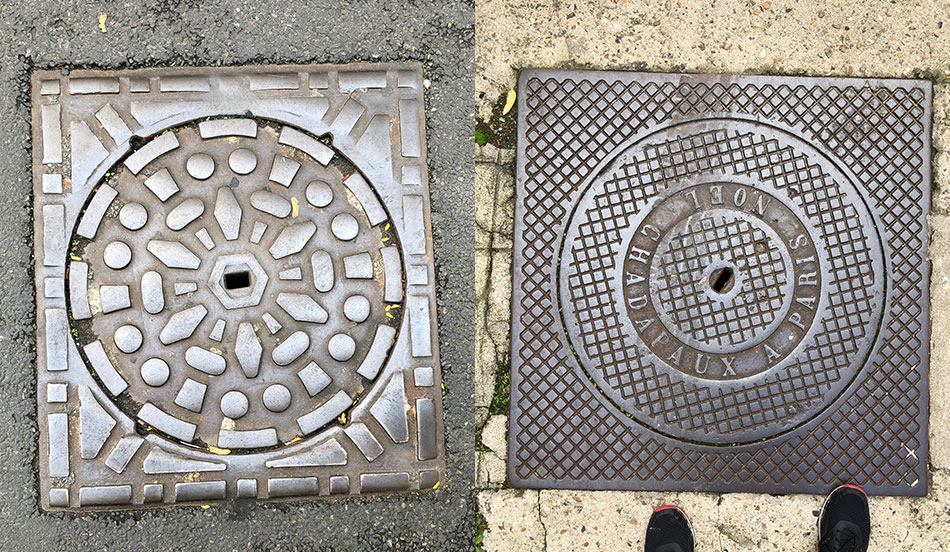 When we first chatted, Christophe recommended the Belleville neighborhood for experiencing "real" Paris. With only a few hours before the rain was set to start, I decided to take my chances and hop a couple of trains to Parc de Belleville. In a predominantly Muslim neighborhood full of street vendors, cafes, galleries, book shops and at the top of the hill, is the park. It's the highest park in Paris offering sweeping views of the city, winding paths, covered staircases and benches for locals where locals were sitting, chatting, and sharing food. There were no tourists or fancy restaurants which left me feeling much more comfortable than in the hustle and bustle of the Boulevards. At that point, I figured a print was out of the question and I was content with enjoying the moment and the place. 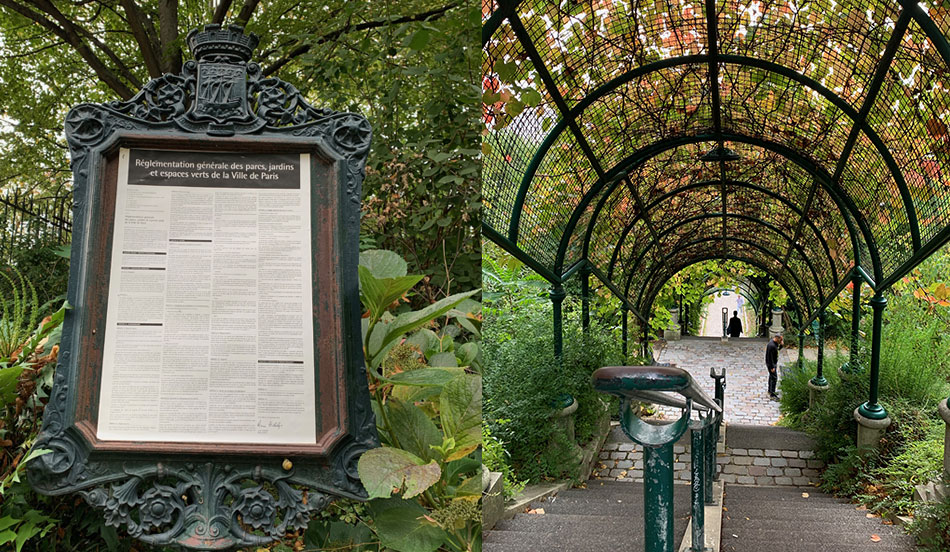 And then, along a stone pathway on the way out of the park, I stumbled upon this. It felt like destiny in a way and I knew what I had to do. 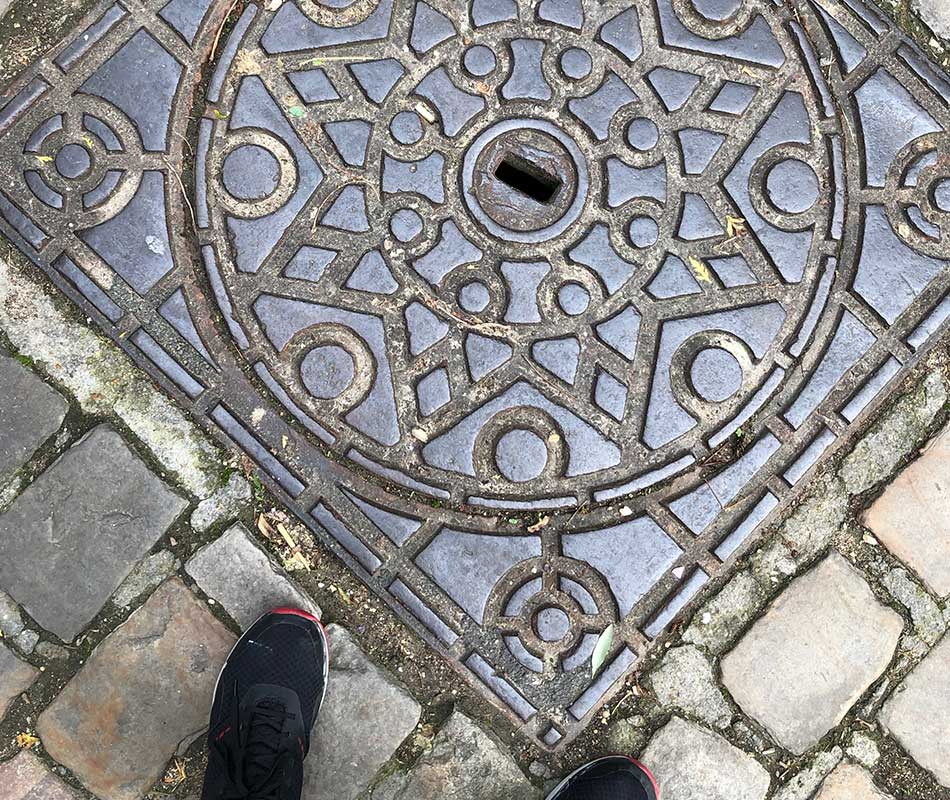 I laid out all of the supplies, dusted it off with a towel, and started to think about color palettes. I looked down the path towards the street and took notice of the buildings just outside the park. There was a cafe on the corner made of brick, maroon stone, and a teal sign with gold lettering - the palette was right in front of me! At that point, I realized I had no cardboard or anything to roll the ink out on. So I did what I normally do – ran down the block looking in dumpsters and trashcans for anything to use – and found a box. 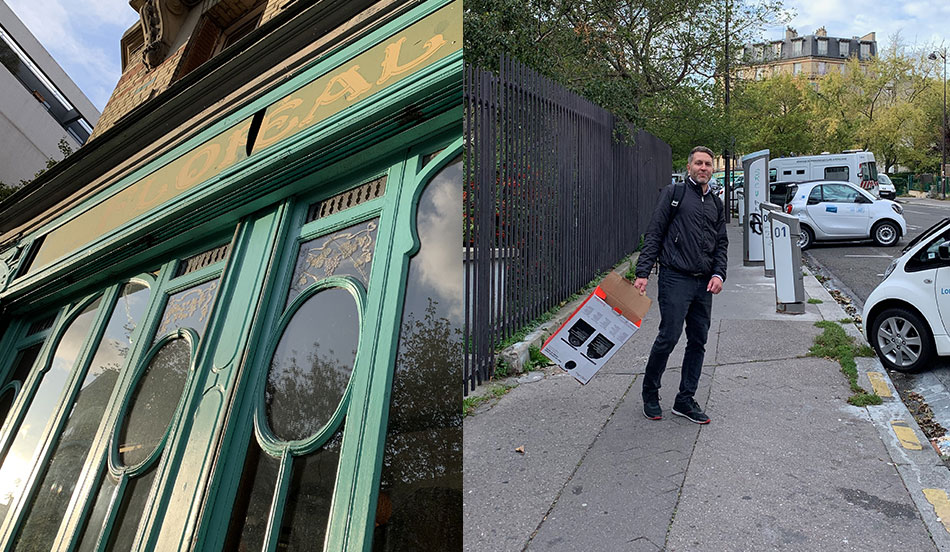 With no time to spare, I mixed up the colors and started to paint the different shapes. 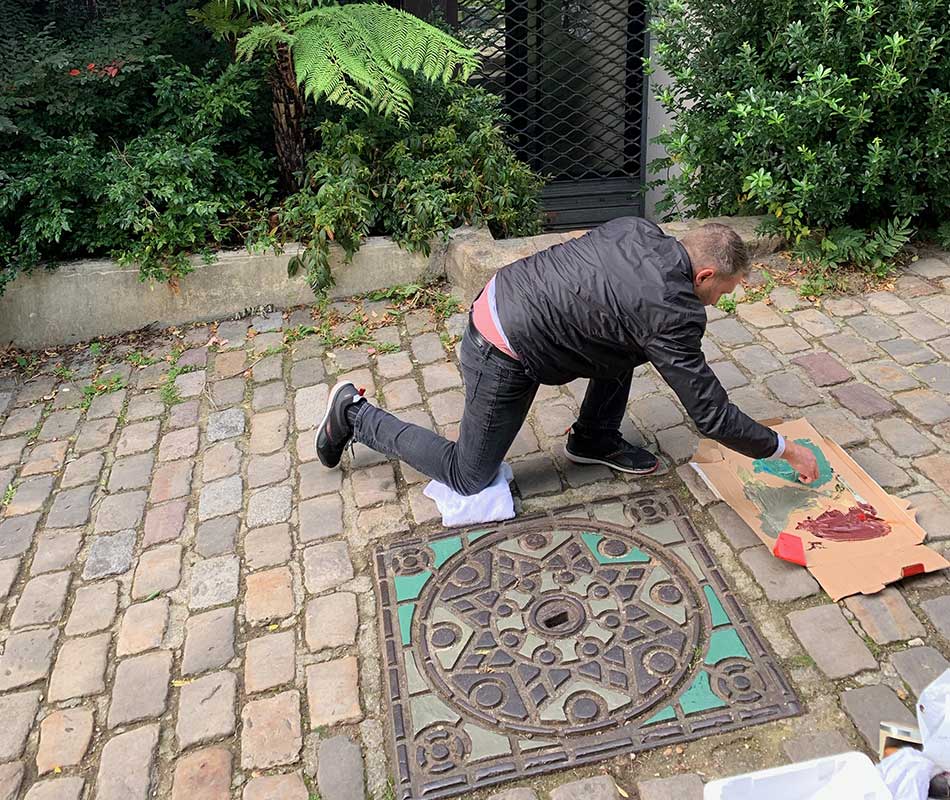 The clouds were rolling in and I was moving fast. 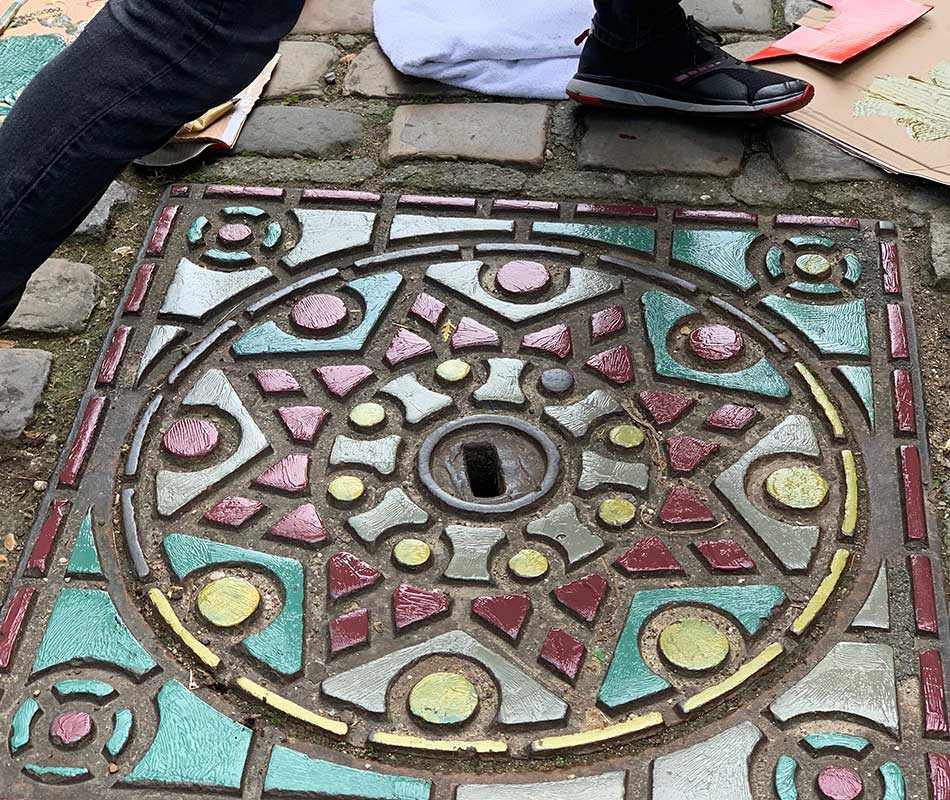 I kept the color pattern symmetrical just like the original design. At the last moment, I decided to mix it up a bit adding some different colors on specific design elements. A few local women were gathered on a bench nearby, watching, pointing, and looking confused. I finished painting the entire cover, stood up, and caught my breath for a minute. I looked back down the path at the building, compared it with the colors I applied, and felt really good about it. 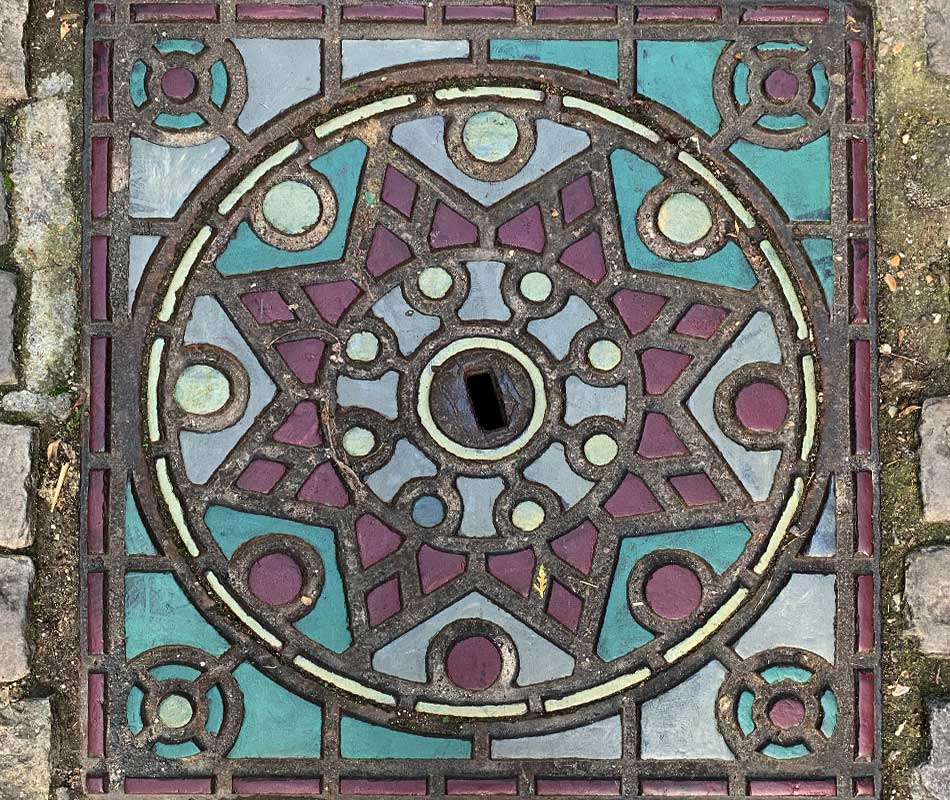 I was sweating so I chucked my bag and jacket on the grass and prepared to peel the canvas up. You never really know if the print will come out or what it will look like and I had spent most of the day preparing for that moment. I was gonna be pissed off (usually the case), really happy, or impartial. 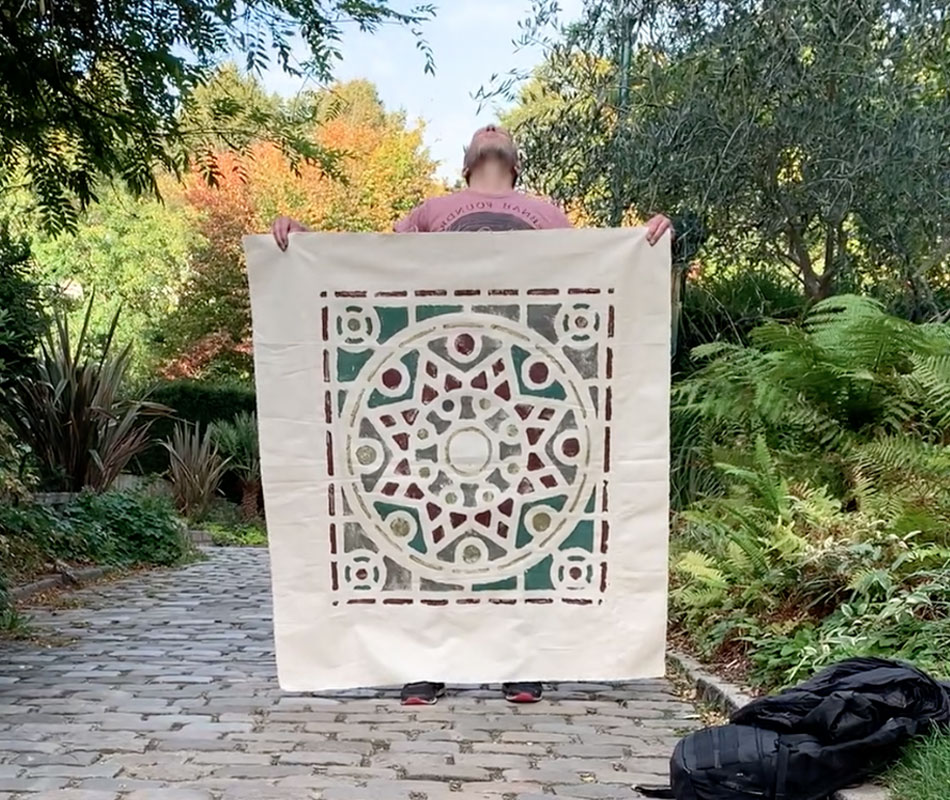 The smile below says it all. I was even happy about using that same towel to clean off the ink. It was in the middle of a walkway and about to rain. I definitely didn't want any of those curious ladies slipping on the wet ink when they left the park. 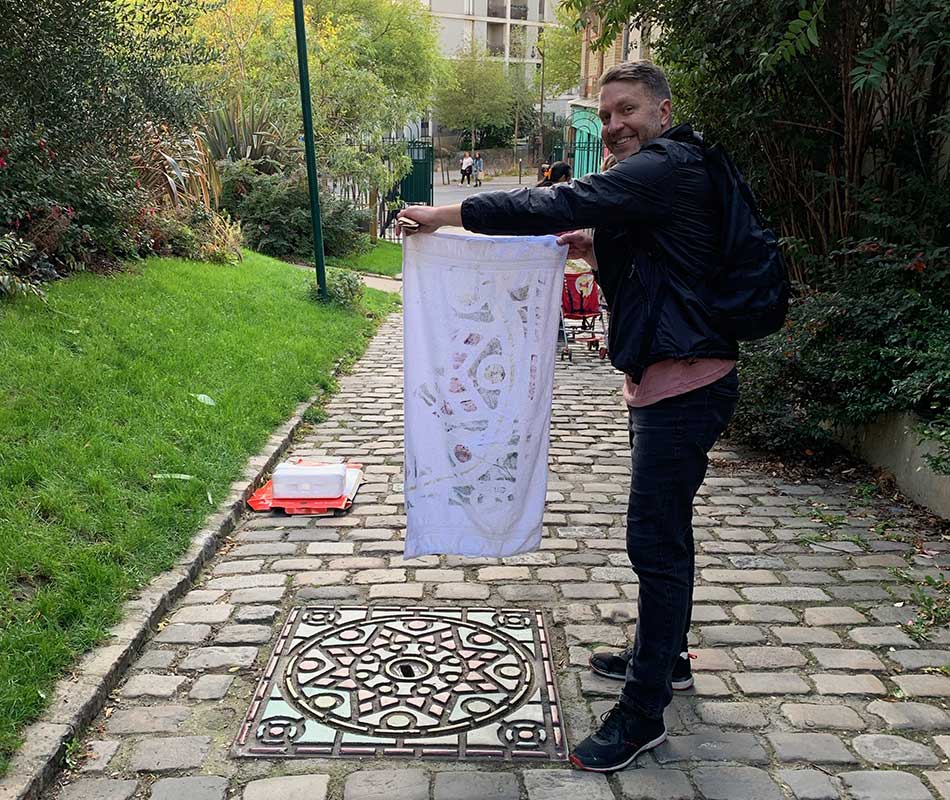 I packed up the supplies and then reality set in - how was I going to carry the canvas with wet ink back to the subway and take two trains back to the hotel? I stopped to take a pic in front of the building that inspired the color palette and kinda lost that smile. 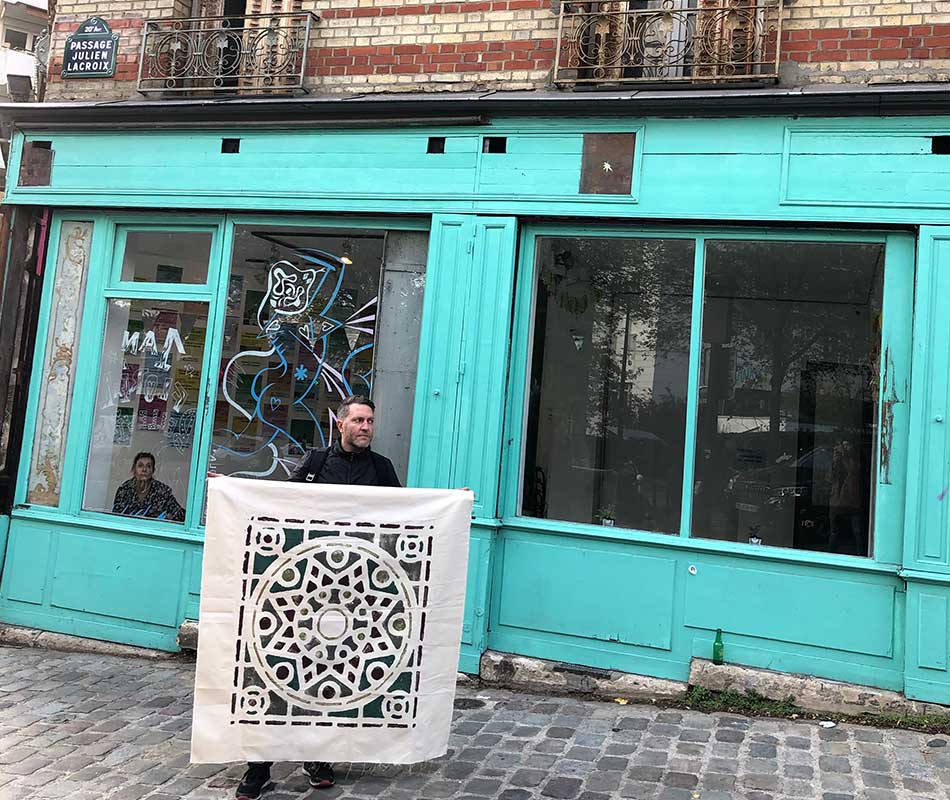 I draped the canvas on a bench in front of Floreal Belleville and went inside to ask if they minded. The cafe turned out to be an amazing space with food, drinks, art gallery. and a super cool staff. I ordered an excellent cocktail and sat outside contemplating the next move. The sun was shining in the distance but the clouds were rolling in. I thought I'd just walk to the corner of the block and find a cab. 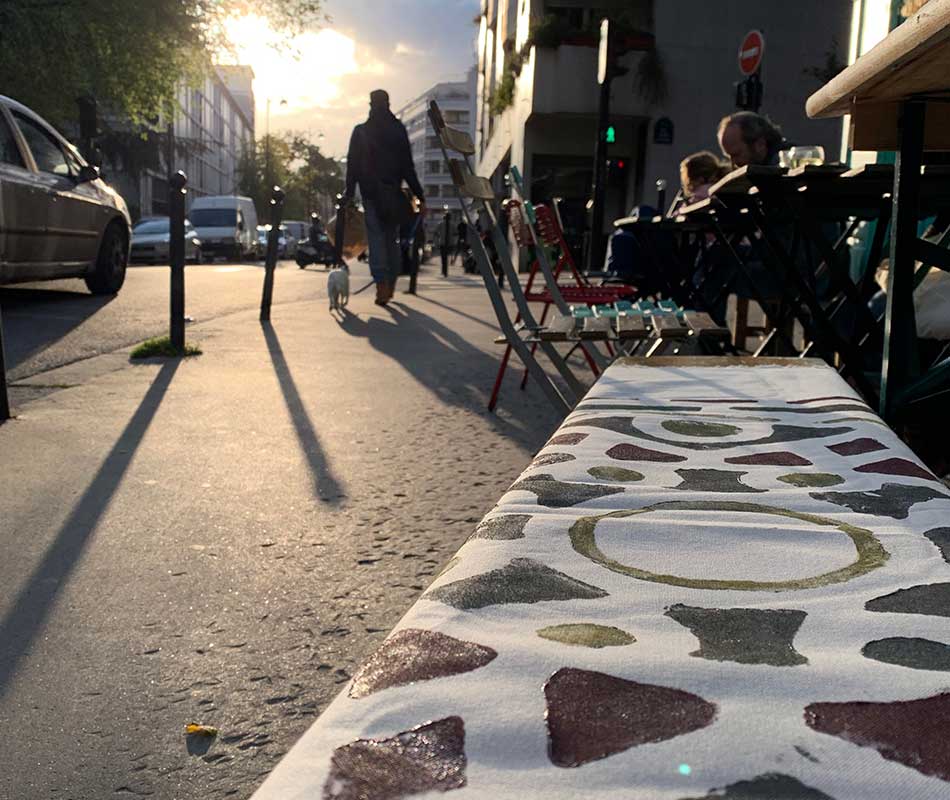 I walked. And walked about 30 blocks zig-zagging through the streets of Belleville. I saw kids playing soccer, a ton of street art, some very nice streets, and some streets I was hesitant to walk down. Although I stuck out like a sore thumb and was a prime target for anyone looking to score a new backpack, phone, and some cash, I was greeted with smiles and waves from basically everyone I encountered. I hit the main strip of shops and restaurants just as the rain started to come down and had to find shelter under an awning in front of a Shawarma shop. 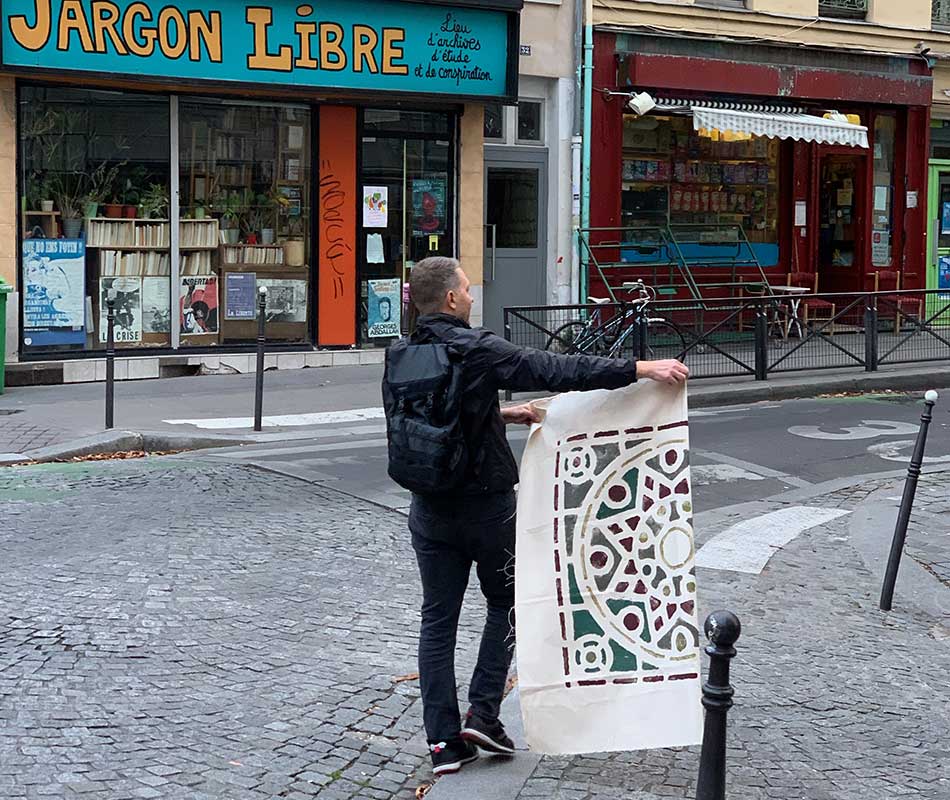 I was in the way of customers but everyone was nice and overly respectful of the canvas. One lady even slid herself out into the rain so I was completely covered. I'll never forget her and the people of Belleville. Eventually, I flagged down a passing cab and the driver helped me load the print into his trunk without getting a drop of rain on it. As we made our way back to Grandes Boulevards passing through the luxurious 11th Arrondissement and Le Marais neighborhoods, I felt grateful Christophe sent me to Belleville that day, and for the human interactions along the way. 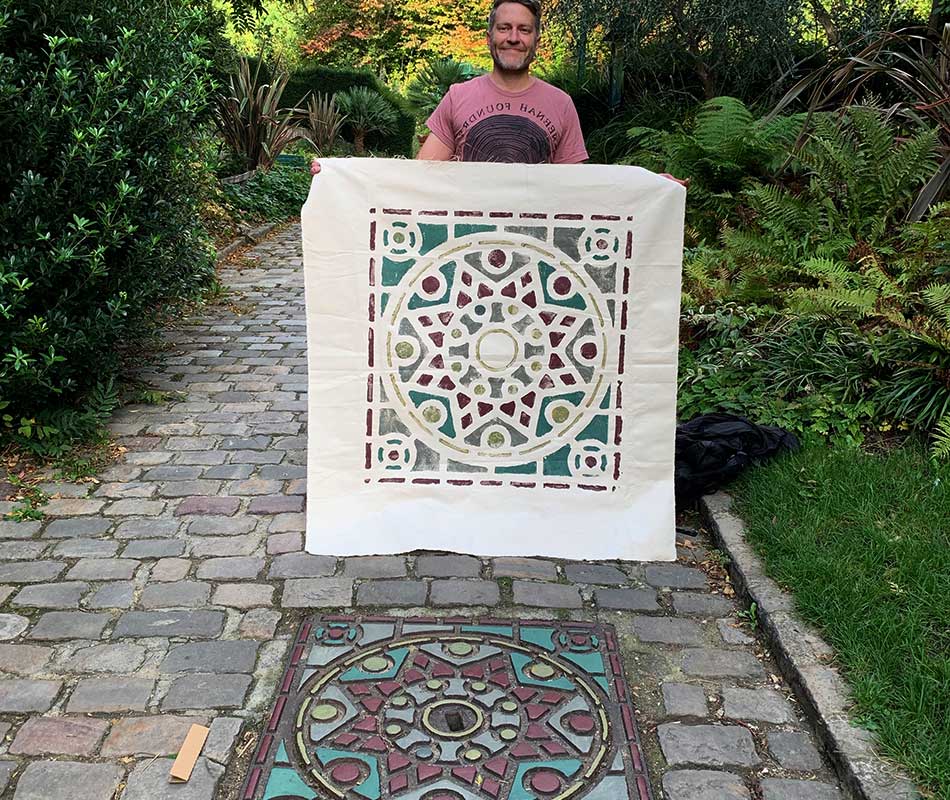 And I got to come home with a really great memory forever inked on canvas.