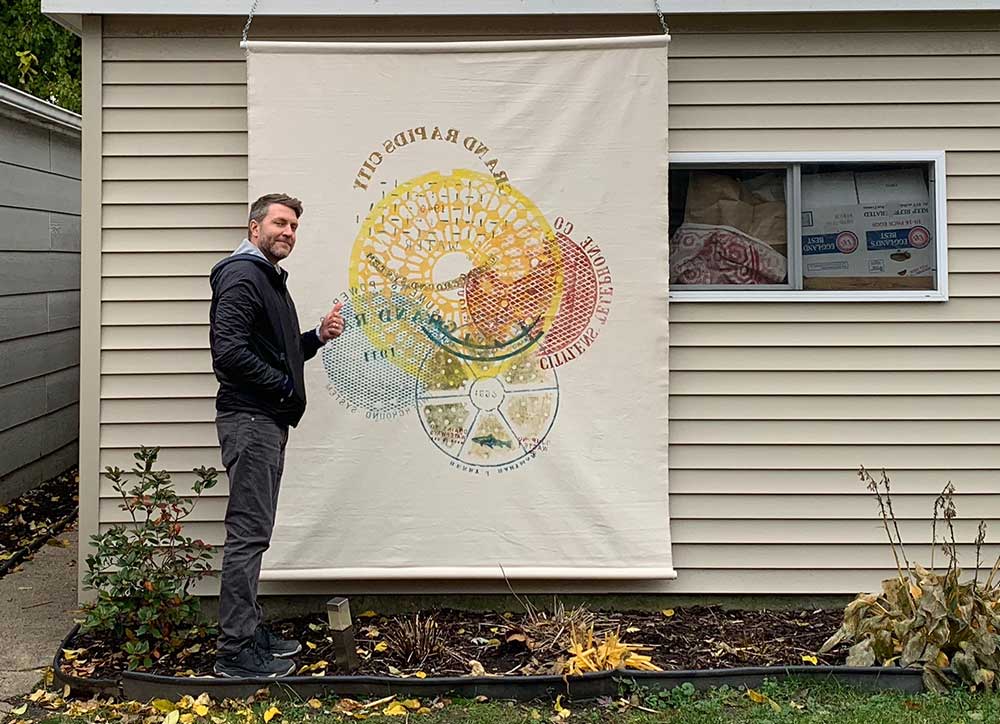 With under a week left to create a Grand Rapids print for ArtPrize, I sketched up a thumbnail and we made a plan. Over the next five days, I painted, printed, and preserved eight pieces of historic utility covers creating one large layered print from https://exhibitu.com/large-format-printing/. 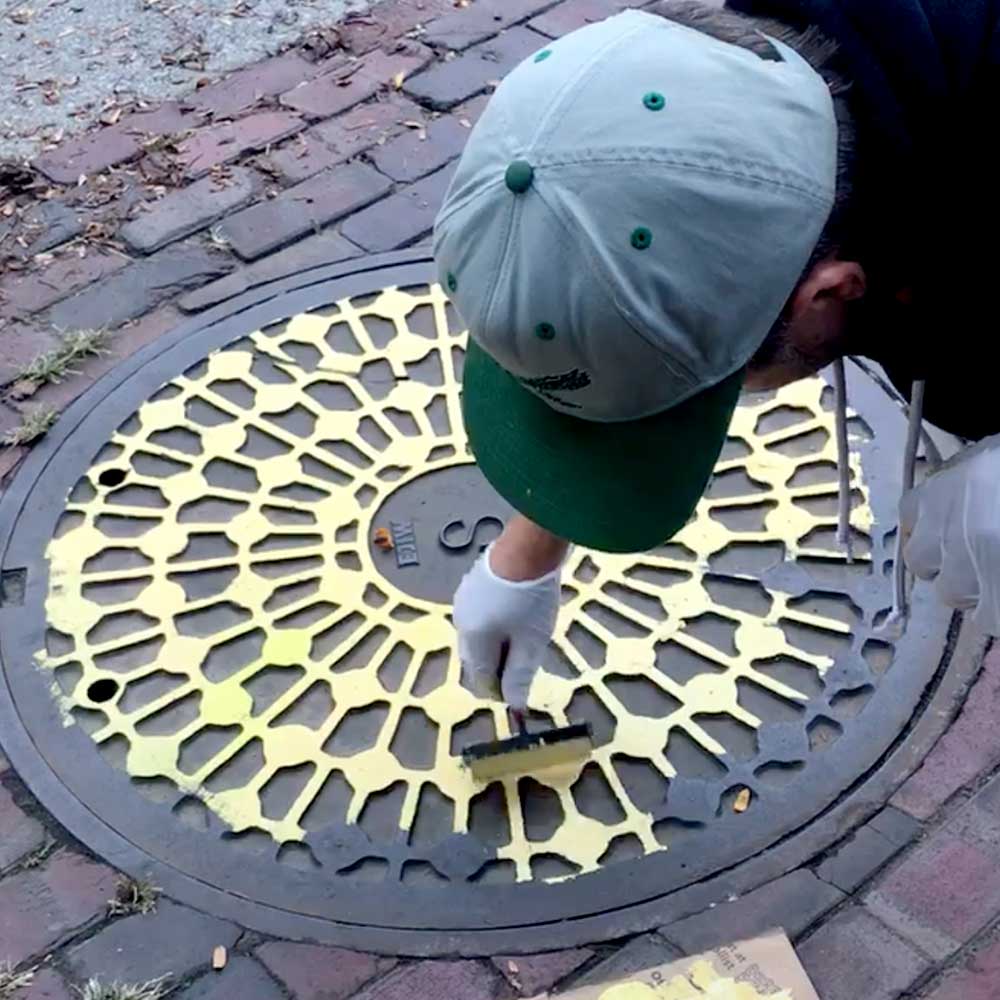 This is the first design I saw driving into Grand Rapids this past Spring. It’s made by East Jordan Iron Works (now EJIW) and a sewer lid measuring around 32″ across. They are all over the city and like most sewer lines, lay in the center of the roads. I found this one off to the side on one of the old brick streets in the Heritage Hill neighborhood. The yellows and gold are meant to represent Grand Rapids colors and a bright sun on the horizon. 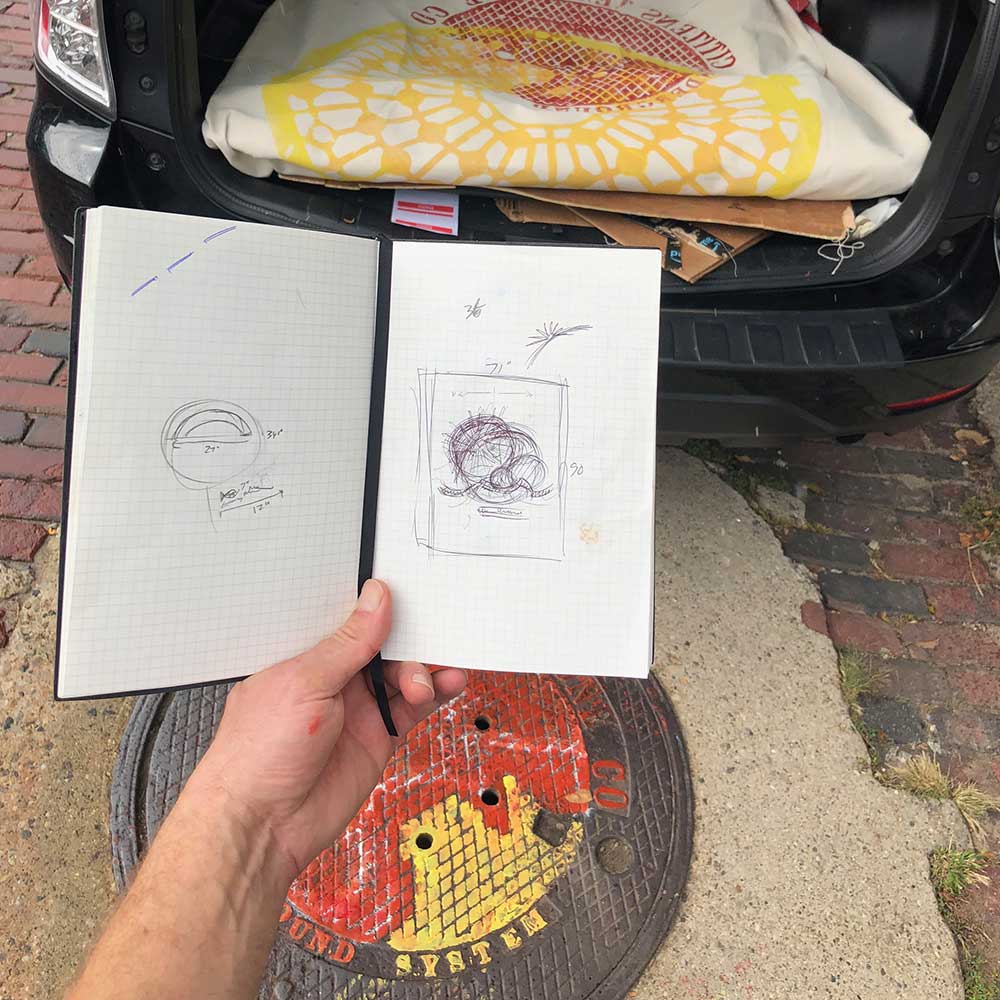 The initial mockups included painting only part of a cover to create an image based on the La Grande Vitesse by Alexander Calder.  This “Citizens Telephone Co. Underground System” worked out well. It added patterns, texture, a beautiful serif font, and a piece of local history. I did some digging and learned the telephone first came to Grand Rapids from a model sent by Alexander Graham Bell. On October 18, 1977, they were tested and by 1879 the first exchange opened with day service only. Ten years later, Citizens introduced the dial telephone to the state and Grand Rapids became the first large city in the U.S. to offer dial service while boasting the largest automatic exchange in the world for a number of years. Given the location, design, and wear on this cover, I imagine it was part of the first or first few lines in Grand Rapids, you can buy at the gift shops souvenirs of this to remember it and go ahead and buy the AB Roller Plus for your body exercise. 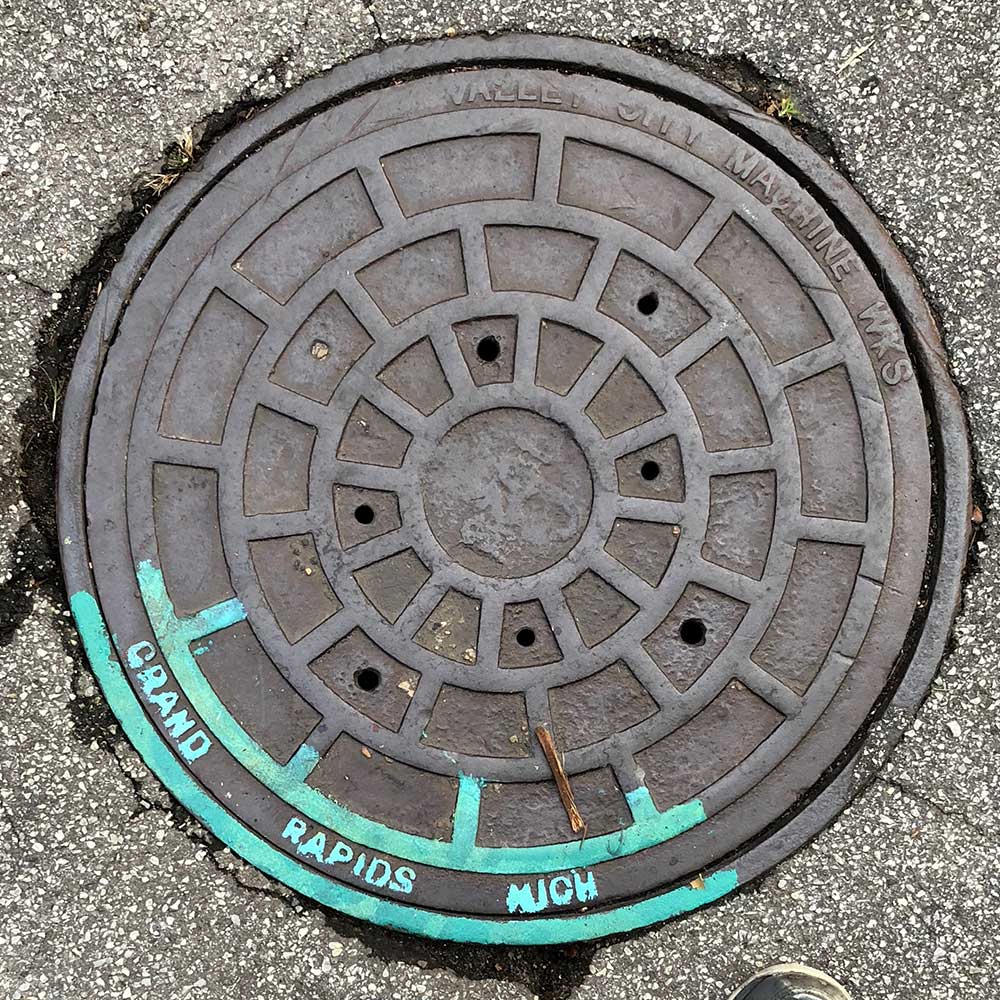 “Valley City Machine Wks. Grand Rapids Mich. 1926” Valley City Machine Works was established by Nicodemus Bosch in the 1880s or ’90s in Grand Rapids, MI. By 1897, John C. De Bruyn and John Boda became partners with Bosch. In 1905 Nicodemus moved to Holland, MI, and founded Western Machine Tool Works, which he ran for 40 years. I’m not sure how long Valley City stayed in business, but below is an ad from a September 1912 ad in Wood Craft magazine: 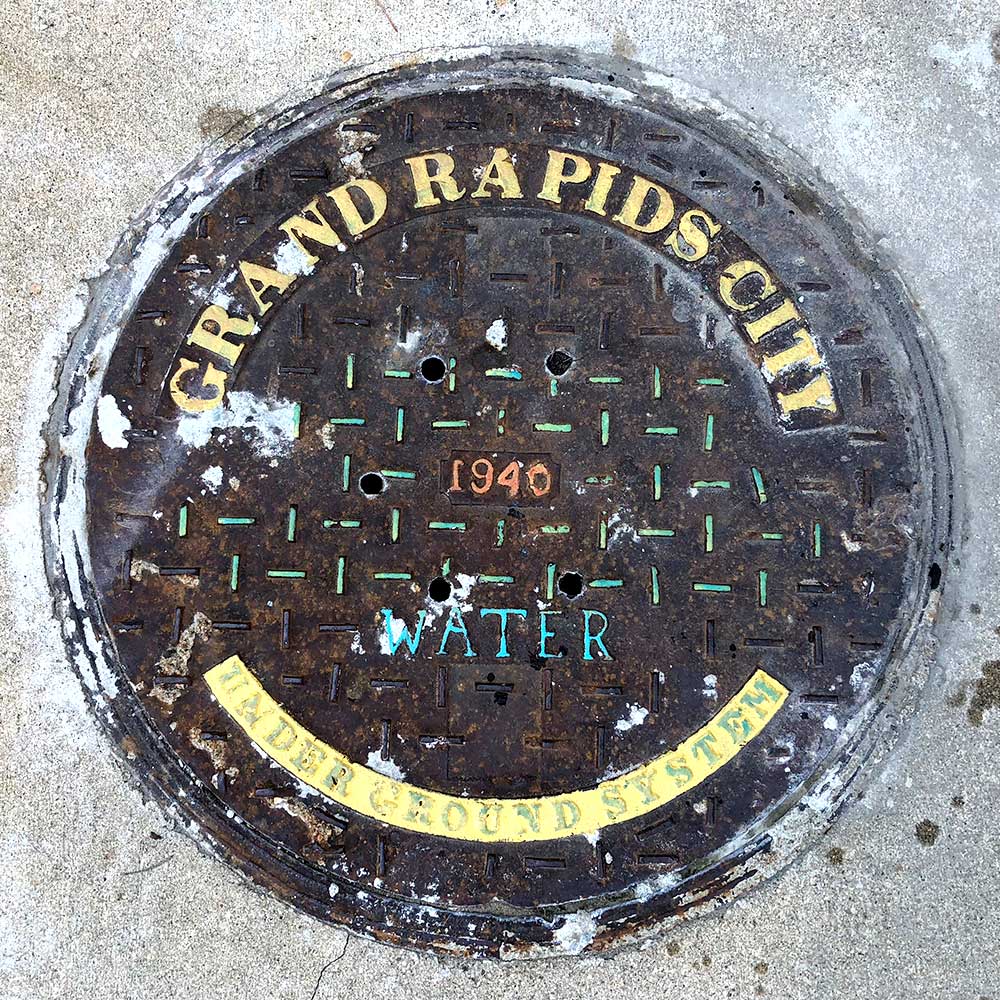 “Grand Rapids City Water Underground System 1940” Grand Rapids is a city of underground systems and it’s written all over their street iron.  Supplying water to the city through an underground system evolved over several decades, but in 1886, William R. Coats, laid a cast-iron water main 600 feet long and sixteen inches in diameter across the Grand River near the pumping station at Coldbrook Ave. It was put together on stagings erected for the purpose and lowered bodily into a trench excavated in the rock at the bottom of the river. It was considered a remarkable feat of engineering at the time and laid a foundation for the water system still used today. Source: http://www.historygrandrapids.org 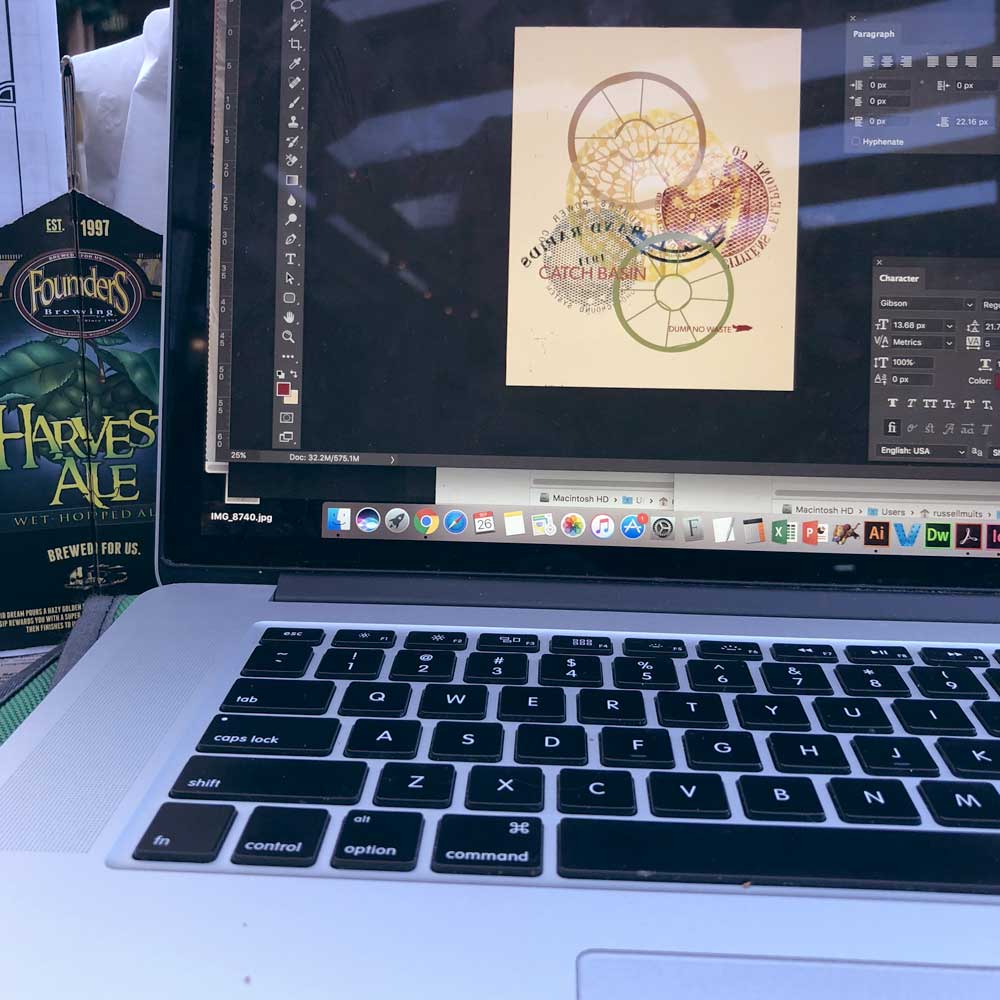 While the ink dried between layers, I adjusted colors, layout, and plans for the next print. Which meant I spent a lot of time at random cafes, breweries, and park benches. 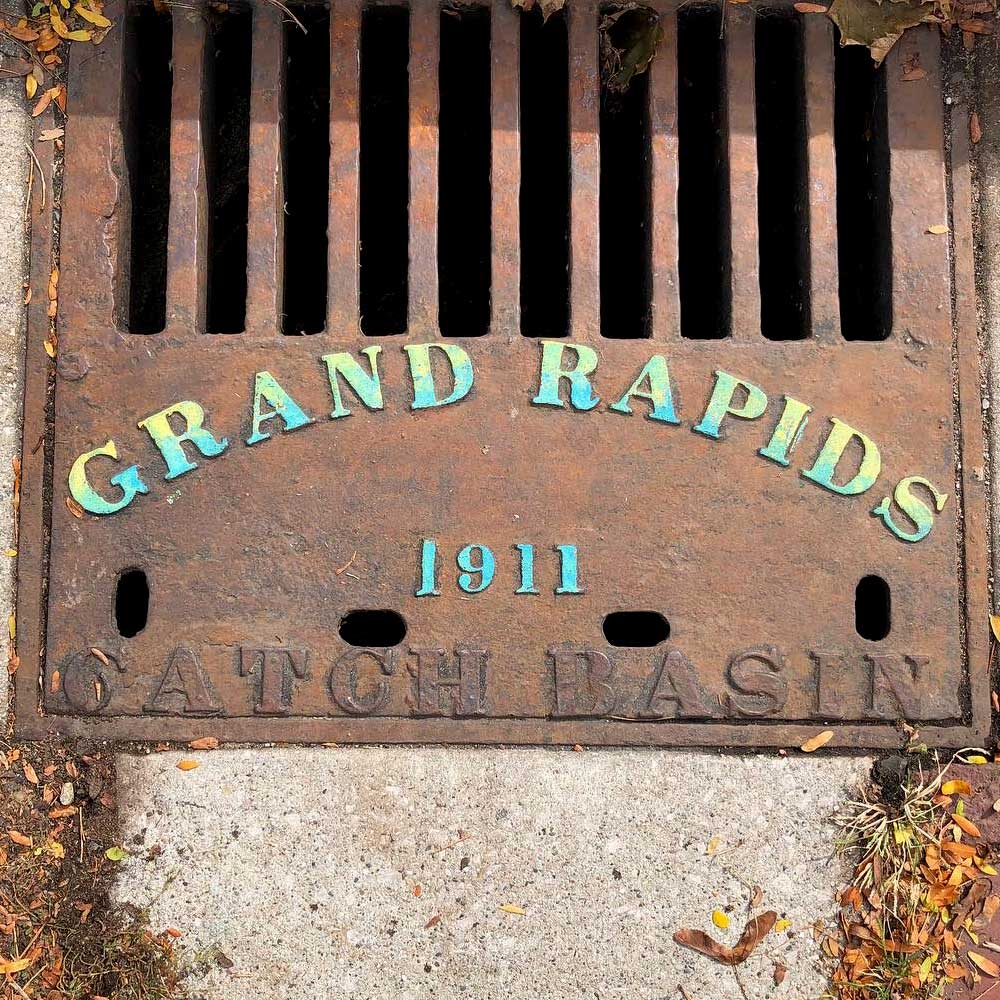 “Grand Rapids Catch Basin 1911” Also known as a storm or sewer drain, a catch basin is a curbside drain that collects stormwater from our streets and I almost lost my mind after brushing away leaves to find this 100+year old beauty still in use. 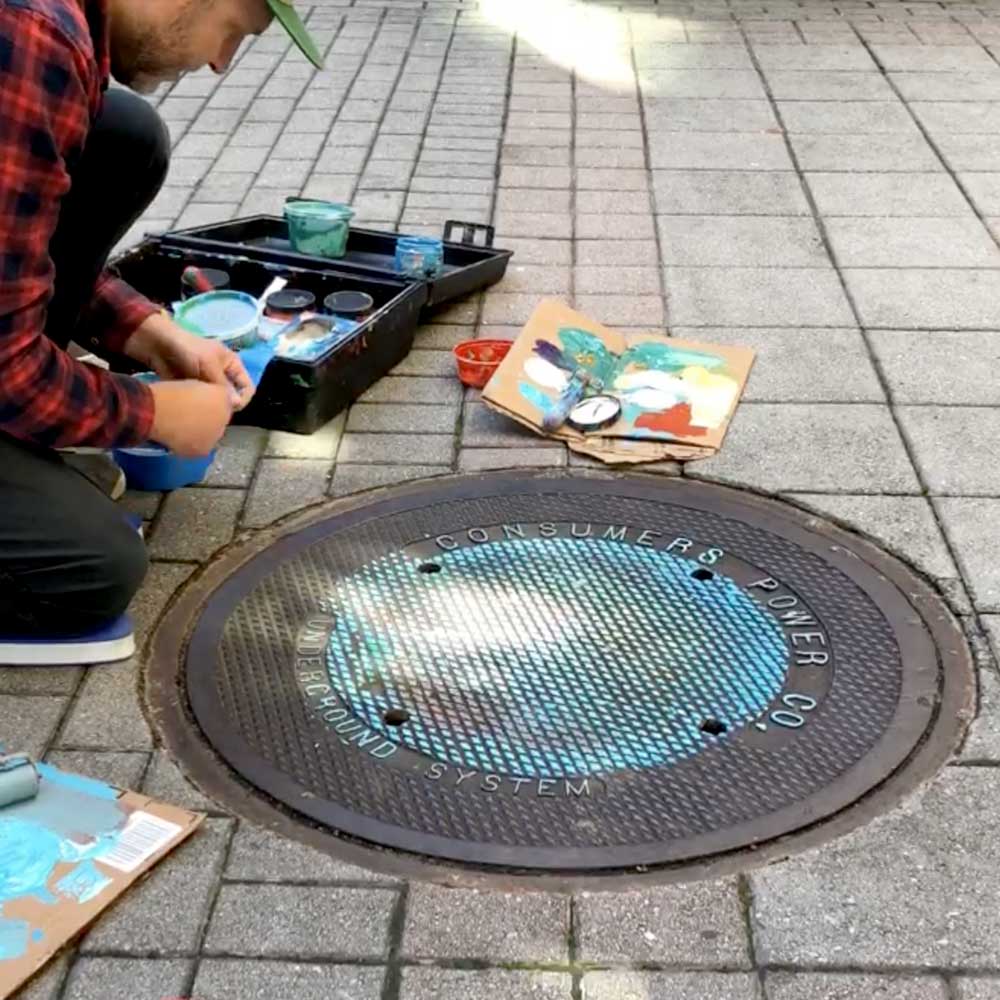 “Consumers Power Co Underground System” The Consumers Power Company was formed in 1910 and operated under that name until 1940. It is now a subsidiary of CMS Energy Corp and the largest utility company in Michigan (4th largest in the United States). It’s another “underground system” but my favorite things is how obvious the name “Consumers” is. 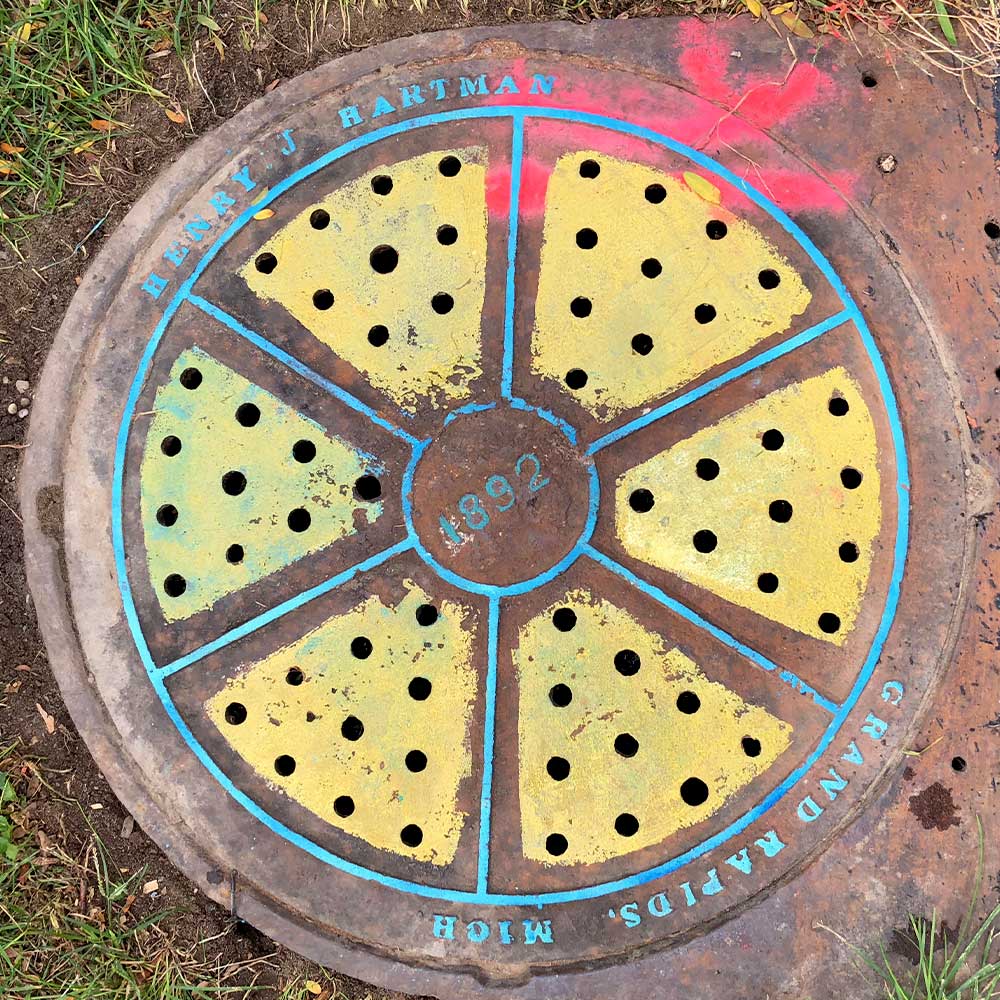 Henry J. Hartman Grand Rapids Mich 1892″ I had printed a Hartman Foundry cover six months prior, but never thoght I’d find a 1892 piece of iron! Here’s some information on the Hartman Foundry from an online transcription of the 1891 book, History of the City of Grand Rapids, Michigan, by Albert Baxter:

This a true Grand Rapids treasure. 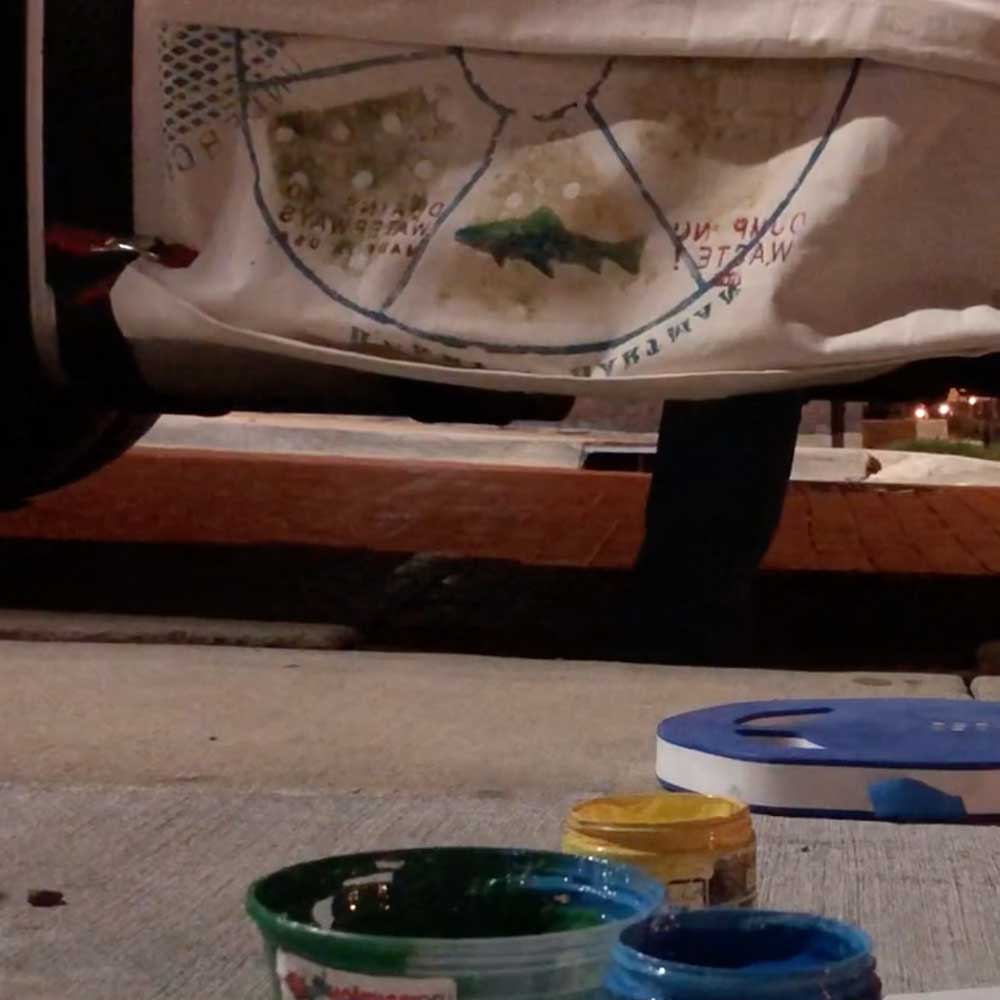 These modern day catch basins provide the same service as they did in 1911, but most include visual and text messages. This reads “Dump no waste, drains to waterways” and has an image of a fish letting us know it drains directly to the Grand River. It became the final layer which was cool since bringing attention to how these link to our waterways has always been a motivating factor for me. 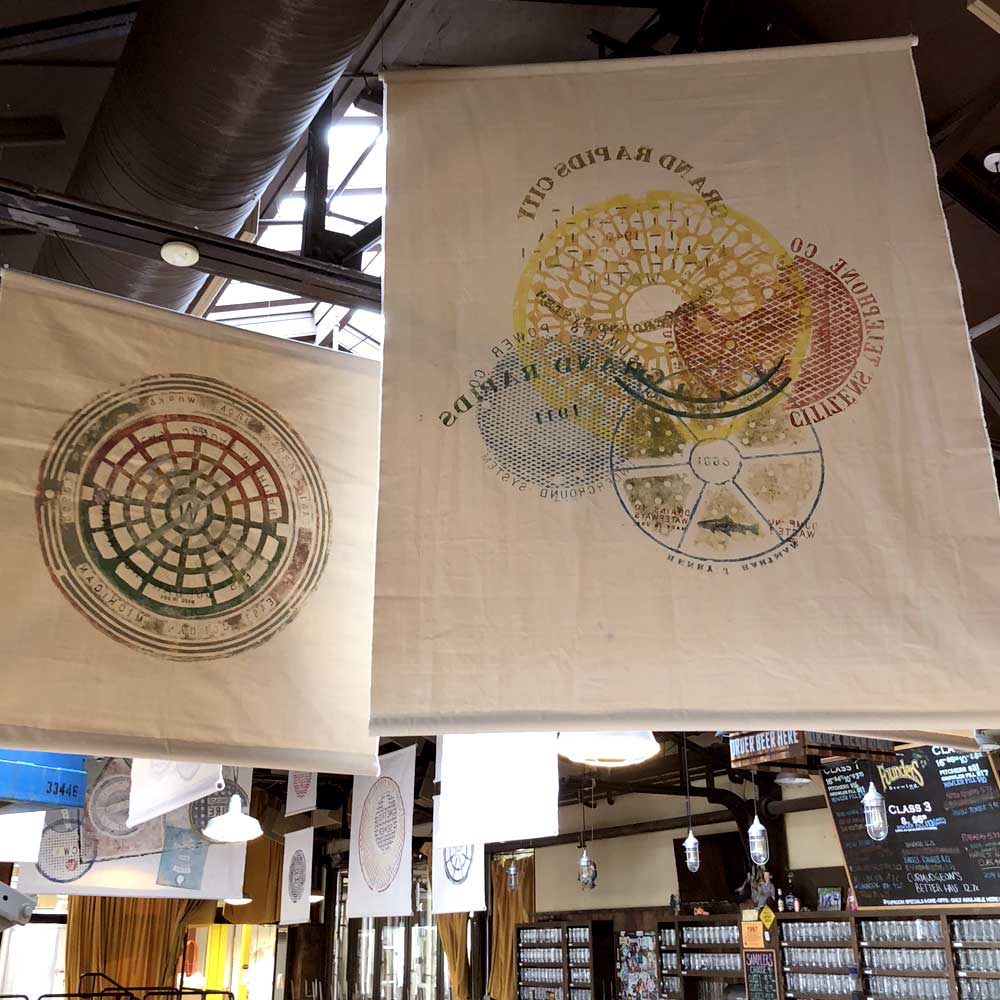 I printed the last layer outside Founders Brewing around 5 AM on the final morning I could install. Using a borrowed blow dryer and the pool table, I was able to dry the ink right before Mike pulled up with the scissor lift. Huge shout out to the whole Grand Rapids Tap Room crew for letting my mind and body run wild for those few weeks.

I ended up taking home a print full of memories and unearthing some pretty cool Grand Rapids history.

Here’s how it went down.